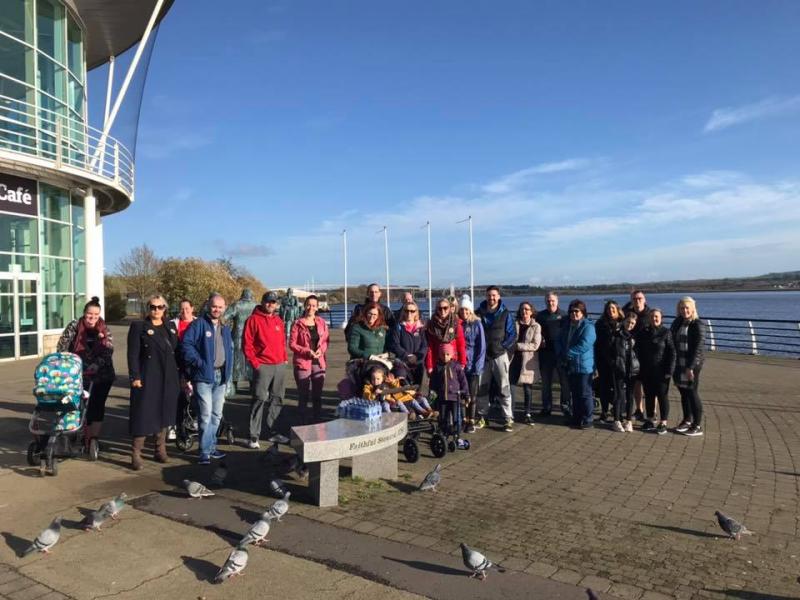 A Derry couple have raised over £26,000 in aid of the hospital unit that saved their twins’ lives. Bob and Michelle McLaughlin’s daughters Saorlaith and Saoirse received life-saving care at Altnagelvin Hospital’s Neo Natal Intensive Care Unit (NNICU), where they were looked after for the first few weeks of their lives. The girls were born in six weeks prematurely in 2016 and suffering from a potentially fatal complication. Doctors discovered during a routine pregnancy scan that they had ‘Twin to Twin Transfusion Syndrome’, where one baby gets the majority of the blood flow and nutrients from the placenta. The decision was taken to deliver them early and they were nursed back to health by the staff at the Neo Natal Unit. For the past three years their parents have held a sponsored walk for the NNICU and this year they went one further after family friend Michael Kelly offered to hold a fundraiser at the Tattoo Lounge in Rathmor Business Park in the twins’ honour. The tattoo fun day and last weekend’s sponsored walk have raised over £11,000, which will be donated to the unit next month. “We meet up with some nurses to see what they need at the unit,” explained Mr McLaughlin. “They are the frontline staff and they know what will be put to the most use. “They go on training days and visits to other hospitals, so they know what kind of stuff is out there.” This year, as well as donating money for hospital equipment Bob and Michelle have decided to set some money aside to help kit out the nurses’ kitchen area. “We felt it was very important that the nurses should have everything they need to make decent food,” he added. “It’s not a lot but it will make a difference to them.”   Supportive   “We want them to know that people are thinking of them and appreciate what they do. “The NHS canteen is closed when they are on night shift and at the minute I think all they have is a kettle and a toaster. “As my wife says, when the parents go home at night we are leaving our babies in their care.” Mr McLaughlin says his employers and colleagues at First Source have played a huge part in helping them raise the £26,000 over the past three years. “The management have been so supportive,” he continued. “They pick their own charity every year, but they also help a lot of smaller charities and a lot of it goes under the radar because they don’t advertise it. “When I brought my sponsorship form for the walk into work I raised £1,000 in just five hours. “That’s how generous people in First Source are, there were people donating £30 and £40.” Saoirse and Saorlaith will soon turn three and were the guests of honour on the sponsored walk. “They had great fun and they kept telling everyone it was for the hospital,” added Mr McLaughlin.
ADVERTISEMENT - CONTINUE READING BELOW