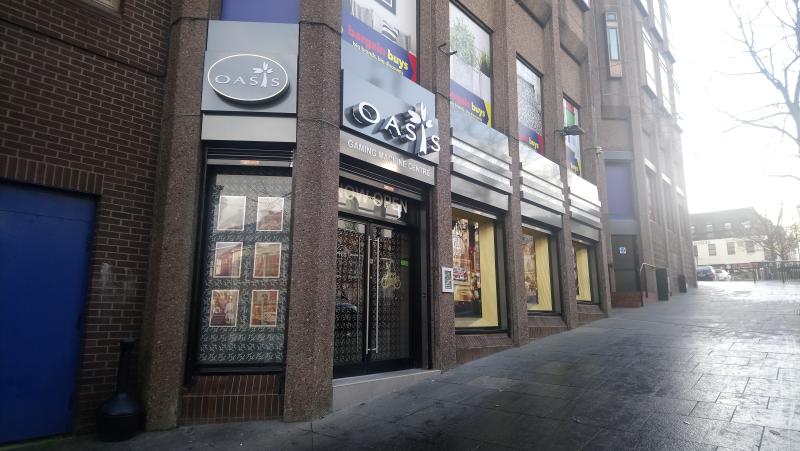 Derry’s council has stalled the implementation of a new policy on issuing permits for amusement arcades after concerns were raised about the consultation process. The issue was raised at Thursday afternoon’s meeting of Derry City and Strabane District Council’s Health and Community Committee, held in Strabane, where councillors were asked to approve a new draft Amusement Permit Policy. The meeting was told that the new policy will serve as a guide for councillors, council officers, applicants and the public on the ‘decision making process for amusement permit applications’. A report brought before the meeting stated that ‘in excess of 100 organisations were notified of the consultation’, 63 of which were churches. However, only seven replies were received. The move comes after a Derry court overturned a decision by the local council to refuse a permit for a new gambling arcade in the city centre last year. Newtownabbey-based Oasis Retail Services had lodged an application with Derry City and Strabane District Council for an amusement permit to open a gaming centre at Unit 23 on Level 2 of the Richmond Centre, pictured above. The company had hoped to install 70 gaming machines at the unit, formerly occupied by Dunnes Stores, which has lain empty for the past 14 years. The unit has an entrance on to Shipquay Street. The application was refused after councillors unanimously voted against it. However, the decision was then quashed at a hearing of the Court of Appeal in Derry after Judge Elizabeth McCaffrey said she had a number of concerns with council's reasons for refusal and granted the appeal. At Thursday’s meeting, councillors had been expected to approve the new policy, with Sinn Fein’s Eric McGinley proposing to accept the recommendation on the grounds that it would ‘provide a foundation’ when making a decision on such applications. However, the SDLP’s Brian Tierney said that it was his understanding that not all of the organisations which the report said were contacted about the consultation had actually been contacted. “If they weren’t consulted, then don’t put in front of me that they were,” Cllr Tierney added. Responding, Seamus Donaghy, Head of Health and Community Wellbeing Health with the council, said an advert had been placed in local papers notifying the public of the consultation. His concerns were echoed by the independent councillor Gary Donnelly who said that he was not surprised at the lack of response to the consultation given the outcome of the court proceedings involving Oasis. Blight Describing amusement arcades as a ‘blight’ on the city centre, he added: “I got my fingers burned going to court to represent this council, it didn’t turn out well and the judge was scathing, so it’s not surprising that only seven out of the 100 responded. “I would put that down to apathy, people saying ‘What’s the point?’ because that’s how I felt when I came out of that courthouse. “One of the seven organisations who responded is actually in this industry, so what does that tell you?” The DUP’s Drew Thompson said that there was number of bodies listed as consultees who ‘knew nothing about this’. “If all of these 100 organisations were contacted, then there would have been more than seven responses,” he added. Cllr Tierney then said that it was his belief that contact should now be made with the organisations not included in the consultation, with Mr Donaghy adding that if approved, the new policy would allow the council to make ‘more consistent decisions’ around amusement arcades. However, Cllr Tierney proposed that any such decision be delayed, adding that council should now ‘re-consult’ with the groups who may have been missed out, given that their responses may help ‘enhance the policy’. The proposal was then accepted.
ADVERTISEMENT - CONTINUE READING BELOW