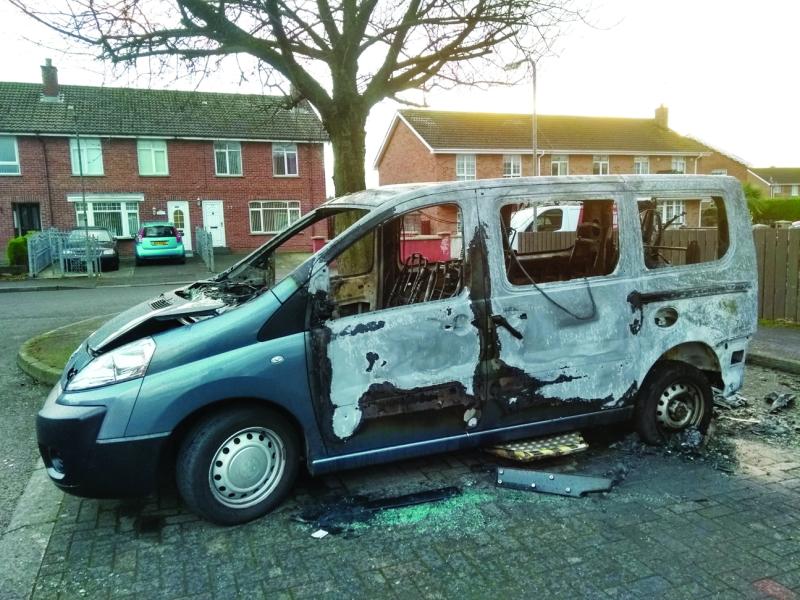 An arson attack on a wheelchair accessible taxi has left a Derry man without a job and his disabled customers without a reliable service in the run-up to Christmas. His neighbour’s taxi was also torched in the incident which took place in the Galliagh area of the city in the early hours on Tuesday morning. The Northern Ireland Fire and Rescue Service (NIFRS) said it received a report of a fire in Bracken Park at 3.12am on November 20. One fire appliance attended from the Northland Fire Station. A NIFRS spokeswoman said: “Firefighters were called to an incident where two cars were on fire. Firefighters wearing breathing apparatus extinguished the fire. “The cause of the fire appears to be deliberate. The incident was dealt with at 3.56am.” The SDLP councillor for the area, Brian Tierney, said the men’s livelihoods depended on these vehicles which have now been destroyed. Cllr Tierney commented: “I’ve spoken to a distraught taxi driver who had his vehicle set on fire last night outside his home in Bracken Park. His neighbours taxi as also set on fire. One of the vehicles is a wheelchair accessible taxi which is now off the road. “It has come as a massive shock to this man. He drives an adapted car to carry disabled passengers and I think this has caused more annoyance to the public because this is a wheelchair accessible taxi. “He was very upset, distraught about it yesterday, right in the mouth of Christmas this man is now off work at his own expense. Those adapted cars are quite expensive and he was an ordinary taxi driver up until a number of years ago when he invested in his car to offer a better service to people.” He continued: “Over the last two or three years he has enjoyed providing a service to these people and now he’s off the road and has to decide whether he can go back and get another expensive accessible taxi or work as an ordinary taxi driver. “I would urge anyone with any information please bring it forward.” The PSNI confirmed that it received a report of two vehicles being ‘deliberately’ set on fire and officers are now investigating the matter. A spokesperson said: “Both were completely destroyed. “It is understood the fires were started deliberately and officers are investigating. “Anyone who was in the area this morning, or anyone with any information, is asked to contact police at Strand Road on 101, quoting reference 132 20/11/18.”
ADVERTISEMENT - CONTINUE READING BELOW