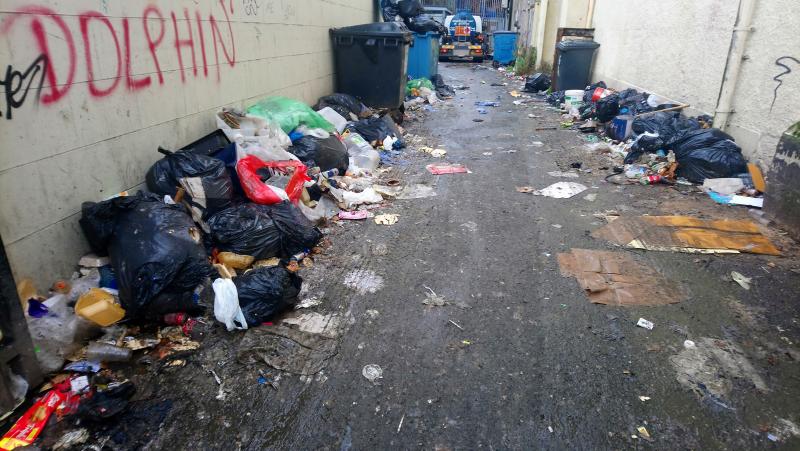 CCTV cameras are to be erected at a notorious dumping blackspot in the city centre to catch those responsible despite fears it will result in fly-tippers simply leaving rubbish in other areas. The new cameras will be put in place at a mews lane off William Street, pictured above, which has been plagued with the dumping of food waste over the past year. The problem has continued unabated despite repeated clean-ups involving a number of agencies including the City Centre Initiative (CCI), the Northern Ireland Environment Agency (NIEA), Derry City and Strabane District Council and a number of community groups. However, the local council has now approved the installation of CCTV cameras at the site in an effort to identify who is behind the continual dumping. The move was approved at Thursday afternoon’s monthly meeting of the council, during which the independent councillor Gary Donnelly said he was ‘concerned’ at the move. He added that such a measure could ‘drive the problem into other areas of the Bogside’ and that council should review the decision. Responding, the SDLP’s Brian Tierney said: “What are going to review? We’re going to be targeting illegal dumping by installing CCTV and it’s this council’s position to try and stop it.” His party colleague, Gus Hastings, adding that ‘council can’t keep cleaning it up’, while Sinn Fein’s Sandra Duffy added that she also did not see the need for any review of council’s decision to install the CCTV cameras. “I’m certainly content with this decision,” she added, “as this is an eyesore, and whatever measures we can put in place to combat that, we should.” Meanwhile, the DUP’s David Ramsey added that there was a similar problem in the Waterside, where ten lanes had to be cleaned up this week. “If someone has a better idea than CCTV, then they should come forward with it,” he added. Traders At that point, the independent councillor Sean Carr challenged an earlier comment made by the SDLP’s Gus Hastings that council had cleaned up the alleyway. “Council hasn’t cleaned this up, it was the traders who done it and community groups,” he told the meeting. However, Karen Phillips, Director of Environment and Regeneration with the council responded that council had cleaned the lane ‘on a number of occasions’. “Once,” Cllr Carr replied. Cllr Donnelly said that the council was not directly responsible for cleaning mews lanes, would it therefore be installing CCTV at other mews lanes in the city. “Where does this stop?” he added. Responding, Sinn Fein’s Michael Cooper said that council could not place the cameras at laneways which lay in residential areas, but only in ‘commercial areas’. “Fill your boots then,” Cllr Donnelly added.
ADVERTISEMENT - CONTINUE READING BELOW