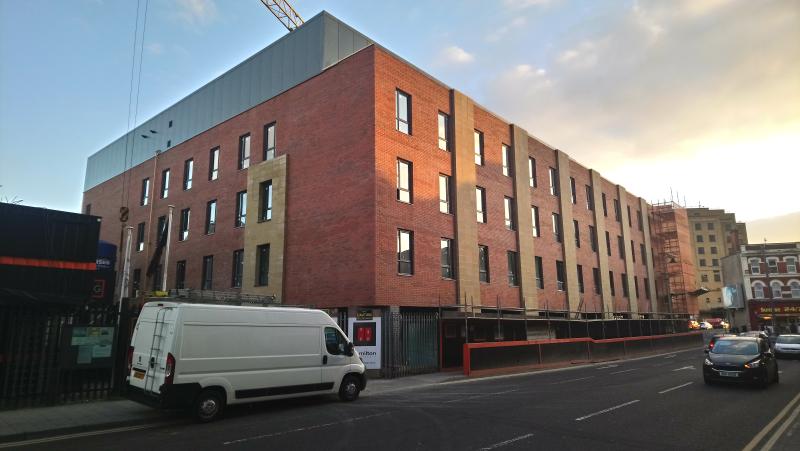 A new hotel set to open in Derry next year is to expand its current capacity by 40 rooms, it has emerged. The new 116-bedroom Holiday Inn Express Hotel is currently under construction at the site of former Strand Bar and Flamin’ Jacks complex on the corner of Strand Road and Great James Street. It will create 47 new jobs once completed and boast a Marco Pierre New York Italian Restaurant, two meeting rooms and three retail units and will provide accommodation for up to 40,000 visitors a year. Speaking to the Derry News earlier this week, Brendan Duddy of the Duddy Group, the applicants behind the new development, said that it is hoped that the hotel will be operational by March 2019. He added that the hotel would also be expanding its capacity to 156 bedrooms with the conversion of an existing floor at the top of the building. Mr Duddy added that once opened, he hoped it would ‘transform’ the Strand Road area into a thriving hospitality hub. “We’re delighted to be extended the capacity, and we’ll be doing that through the conversion of what’s known as a ‘setback floor’, which will now be used for accommodation,” he said. “We’re currently looking at a March 2019 opening date, and we’re excited about the impact this will have on the Strand Road area. “There’s been a lot of investment in that part of the town over the past years, there’s a great variety of places to eat and of course we’ve had Primrose really putting a lot of effort in. “Hopefully, we’ll also play our part in transforming the Strand Road and helping to increase footfall.” He added: “What you have to keep in mind is that every person who stays in Derry, spends in Derry, be that going out for a bite to eat, a drink, or taking a taxi somewhere, that is money which is pumped into the local economy and will not be lost to other areas.”
ADVERTISEMENT - CONTINUE READING BELOW