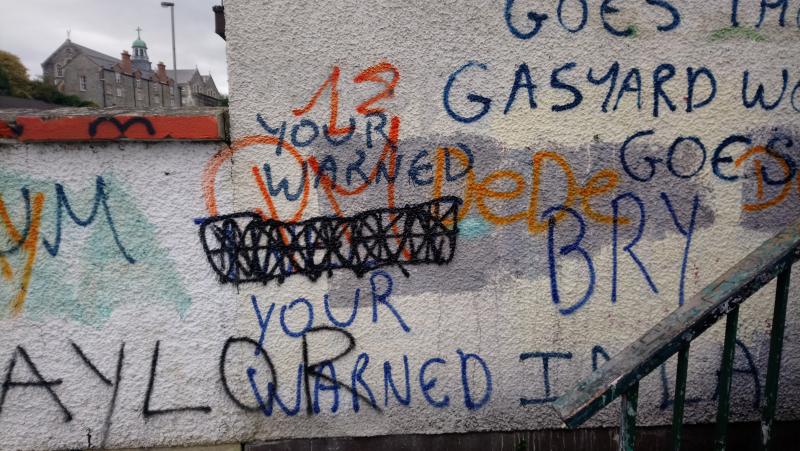 A new council-led task force is to be set up in Derry to tackle ‘offensive’ graffiti through the city despite some reservations over the impact the move could have on young people. The move came at the monthly meeting of Derry City and Strabane District Council, held in the Guildhall on Thursday afternoon, where the SDLP’s Shauna Cusack put forward a motion calling for the move. Speaking at the meeting, Cllr Cusack called on the council to ‘recognise the negative impact of unsightly graffiti in our public spaces, community areas and residential streets’, adding that such ‘vandalism should not go unchecked’. However, Cllr Cusack stressed that she welcomed the action of local street art groups such as UVArts. She added that despite the good work being done by such groups, council had a duty of care with regards to the ‘positive housekeeping of our area’ and to remove ‘offensive and unsightly graffiti’. Cllr Cusack added that council now needed to take the lead on the matter, as it was being largely ‘ignored, accepted or thought of being someone else’s responsibility’. She proposed that council now take the lead in either removing the graffiti or replacing it with street art by setting up a ‘graffiti management team’ to act as a point of contact for the public, organisations and elected members to report such issues to. “This task force will help establish ownership of properties and places and determine responsibility and this will enable the councillor to liaise with landlords, companies and individuals to reach a resolution to the issue,” she said, before adding that established community art groups would also have a part to play in the project. Commenting, the independent councillor Gary Donnelly said graffiti has been used for ‘centuries’ by those whose voices ‘would not have been heard otherwise’. In 2015, Cllr Donnelly, won an appeal against a six-month jail sentence handed down Derry Crown Court after he and two other men were convicted of causing criminal damage by painting of political slogan on Derry’s Walls. “It has been pointed out that the Derry Walls has been used as a political billboard, going back to the time of the Siege,” he said, before adding that those involved in the struggle for Civil Rights had also used graffiti as a means of propaganda, most notably at Free Derry Corner. He continued that they were ‘established mechanisms’ within community groups to address issues such as graffiti, and his ‘fear’ was that Cllr Cusack’s proposal ‘could undermine this work’. Cllr Donnelly asked if Cllr Cusack was aware of these mechanisms and had she or her party had any discussions with these groups. Responding, Cllr Cusack said one of the problems faced by people was that they may not want to approach a group because they feel they are ‘politically affiliated’ and council taking the lead would provide a ‘neutral starting point’. The motion was then unanimously approved.
ADVERTISEMENT - CONTINUE READING BELOW