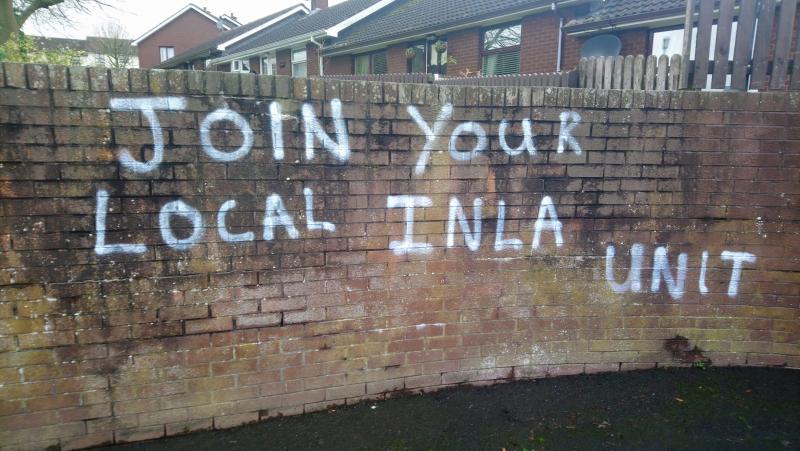 Sinn Fein has accused the INLA of turning a housing estate in Derry into a ‘ghetto’ due to an upsurge in graffiti in the area which had come at the same time as a spate of recent attacks. The comments came at Thursday afternoon’s monthly meeting of Derry City and Strabane District Council, during a discussion on the setting up of a new task force to tackle ‘offensive’ graffiti. Speaking at the meeting, the Sinn Fein councillor Eric McGinley said that the appearance of INLA graffiti in the Ballymagroarty had coincided with a number of recent attacks in the area. “I would highlight the appearance of INLA graffiti in a number of areas, particularly in Ballymagroarty, and almost a parallel link in attacks on people and property in the estate,” he said. “There’s understandable speculation as to whether all that is linked, and many residents have been expressing concern recently as to why Ballymagroarty is being targeted.” He added: “Why is it happening, especially when you consider that the INLA declared a ceasefire in 1998, announced an end to its armed campaign in 2009 and decommissioned weaponry on 2010. “The INLA, or the Irish Republican Socialist Party (IRSP), some of whose members might be in this chamber, actually explain to the residents of Ballymagroarty, why the area they’re living in is turning into a ghetto?” He then called on all councillors who represent the Foyleside ward to join him in a ‘unified’ call for an end to the attacks, the removal of the graffiti which he said is ‘blighting’ the Ballymagroarty estate. “We believe that call will let the Ballymagroarty community know that we share their concerns and that we will do all we can to improve their quality of life,” he added. The independent councillor Darren O’Reilly, who represents the Foyleside area, said he would like to ‘update’ Cllr McGinley that he had working with youth groups and the Education Authority (EA) on the issue of political graffiti. ‘Masked men’ He continued that it was ‘important’ not to ‘demonise’ the young people who may be involved iN such activity and ‘work with them’. Meanwhile, the independent councillor Warren Robinson added that he wished to echo Cllr O’Reilly’s sentiments. “To sit on your high horse and condemn will not sort the issue out, and as elected representatives we have a responsibility to the young people who are doing this to engage with them,” he said. “I would agree that some of this graffiti is unsightly and should be removed,” he continued, before adding that community activists were already involved in these discussions. The independent councillor Paul Gallagher said that Cllr McGinley had been ‘very selective’ and said we ‘could also talk about masked men running about the Bogside for the benefit of tourists’, while the independent councillor Gary Donnelly accused Sinn Fein of engaging in ‘political point-scoring’.
ADVERTISEMENT - CONTINUE READING BELOW