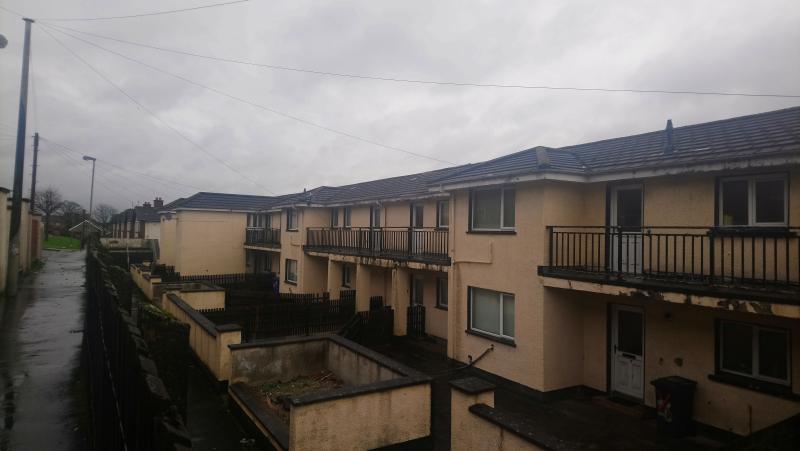 Plans have been lodged for the demolition of a block of flats at Gobnascale in the Waterside area of the city and its replacement with a new social housing development. The application has been lodged by the EHA Group, which has delivered a number of social housing projects across Derry, including a new development on behalf of Apex Housing at lands formerly occupied by the old St Brecan’s High School on Trench Road. The latest development would see the demolition of numbers 23-34 Mimosa Court (pictured above), which is currently a block of flats, and a new development consisting of 27 new social housing apartments erected in their place. The new development would also be extended over empty lands at the front of the buildings facing onto Strabane Old Road. However, concerns have now been raised about the application by the Sinn Fein election candidate Sharon McLaughlin, who said that in its current form, the application does not address a number of outstanding issues, such as parking provision. “As anyone living in the area knows, there are massive issues with parking provision at the rear of Mimosa Court,” she said. “There is an acute need for new social housing in the Top of the Hill, however, we are disappointed with this application as it stands and will be seeking a meeting with the developers to address these issues.” The application has been lodged with Derry City and Strabane District Council and will come before a future meeting of its Planning Committee.
ADVERTISEMENT - CONTINUE READING BELOW