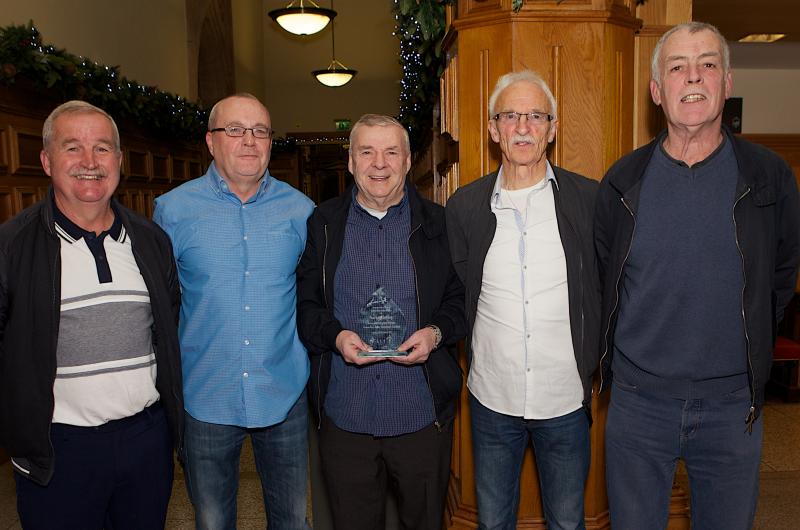 A well-known voluntary steward at the Derry City FC games has been honoured for his 33 years of service with a lifetime achievement award presented by the Mayor. Charles Tierney, better known as ‘Nucker’, was honoured at a civic reception in the Whittaker Suite in the Guildhall on Tuesday evening past, where the Mayor of Derry and Strabane, Councillor John Boyle presented him with his lifetime achievement award. Nicker said he was ‘taken aback’ at the news he was to receive the honour and said he was only told about it a couple of days before it took place, however, he said he was ‘very humbled by it all’. Speaking to the Derry News, Nucker said that his time volunteering Brandywell Stadium, recently renamed the Ryan McBride Brandywell Stadium in honour of its late captain who passed away in March 2017, had been filled with meeting famous faces of the footballing world. “Over the 33 years I have stacks of good memories,” he said. “I got to meet some great managers and players; I met Eusébio, manager of Benfica – he was there when there was a bomb left by the cemetery gates, I met David Ginola, Ronaldinho, Roy Keane, Jackie Charlton, the late Emlyn Hughes and the late Brian Clough. “Brian Clough actually gave me and Liam Redden (another steward) a bottle of whiskey and said it was the first match he had ever seen with no policemen, just us stewards. “I met Alex Ferguson on about five or six occasions and I met Ryan Giggs and David Beckham.” Nucker said that he has seen the Derry City FC through three decades and met all the managers and players. “I got on well with all the Derry City managers and players too,” he said. Nucker, who will celebrate his 72nd birthday this weekend, thanked Tony O’Doherty and Mark H Durkan for nominating him to receive the lifetime achievement award.
ADVERTISEMENT - CONTINUE READING BELOW