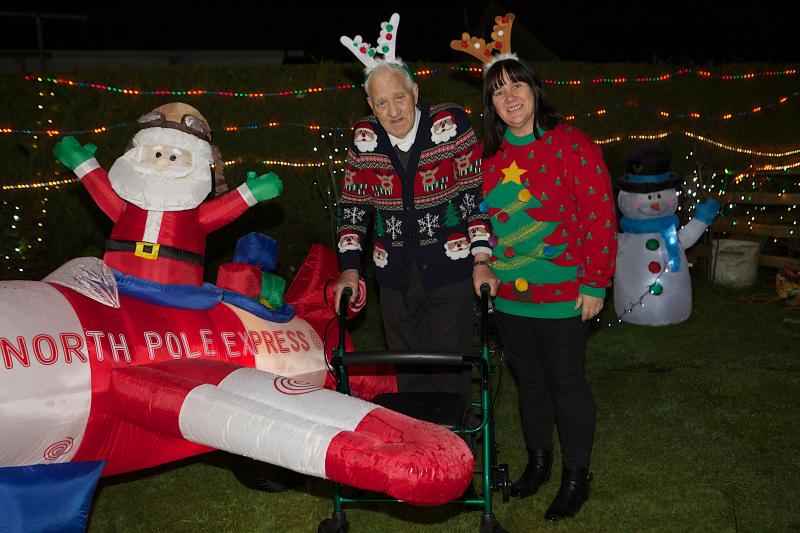 A Derry man who has wowed generations of children with his spectacular festive displays has managed to keep the tradition up thanks to his daughter. Hughie Bell, who is well-known throughout the city for his work with a number of organisations and charities, has been lighting up the Culmore area for decades with his Christmas displays. However, Hughie is no longer capable of the physical activity involved in the setting up of his winter wonderland. Thankfully, his daughter Anne Marie, has now taken up the reins and festooned her father’s Mount Vernon home with inflatable reindeers, elves and trees. Speaking to the Derry News earlier this week, Anne Marie said she was delighted to have been able to continue a tradition that has brought so much Christmas cheer to many. “Dad has been the King of Christmas for as long as I can remember, starting out by Christmas decorations out of cigarette packets and big match boxes. “He used to wrap them in newspaper and Christmas paper with string hang them on the tree!” she joked. “Our crib was always the centrepiece of our home and the main focus of our celebrations. “We have had many losses in our family circle over the past number of years and dad always says at Christmas we have to keep going for the children.” Anne Marie added that while her father’s health has meant he has had to take a step back, he is still very much present in an advisory role. “He hasn't been in good health so he has handed over the reins to me, but he is still keeping his hand in directing me from his chair,” she added. “It’s great to see him looking out from his window at the decorations and knowing the tradition he started is still going.”
ADVERTISEMENT - CONTINUE READING BELOW