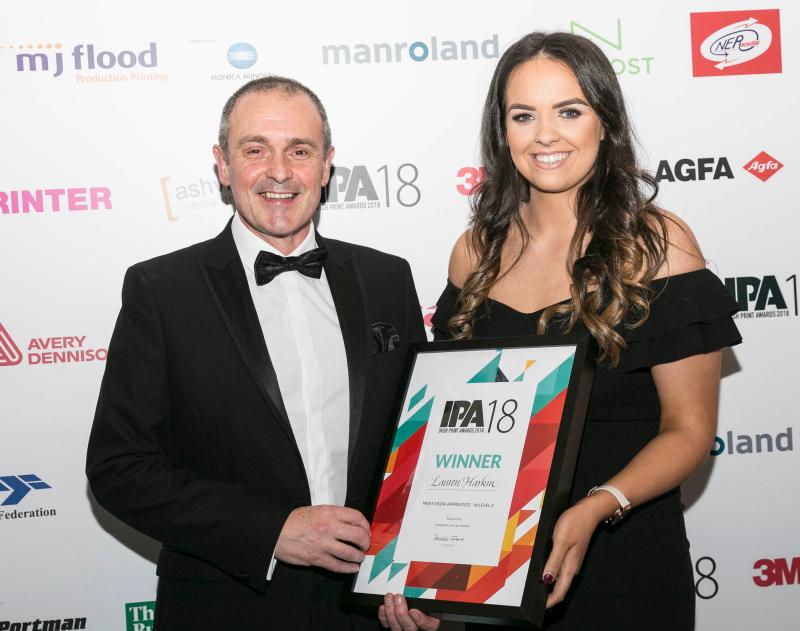 A young Derry print technician who has just been crowned Apprentice of the Year at the 2018 Irish Print Awards says more women should apply for STEM apprenticeship roles. Lauren Harkin, who works as a pre-press technician at Nuprint Technologies in Derry, joined the company as an apprentice in 2017, after completing A-Levels in Engineering and Double Award Applied Science. Also a student at Belfast Met, she beat off stiff competition from 74 of her peers to win the Irish Print Awards accolade. “I’m absolutely delighted to have won the award,” said Lauren. “I would really encourage more women to go down the STEM apprenticeship route. The print industry is developing very fast and becoming increasingly technologically advanced, so the future will require staff with a strong background in STEM subjects. “While my male colleagues are great, it would be fantastic for all companies to engage with more women. I’m glad I work for a company which encourages me as a young woman in STEM. It’s very rewarding to be part of a business which is always changing, adapting and expanding. There are always opportunities to train and progress.” Although initially involved with Nuprint’s design team, developing artwork and ordering equipment, Lauren’s talents soon saw her chosen to be part of the company’s new digital department. Having invested heavily in a state-of-the-art HP Indigo digital printing press, Nuprint sent Lauren to Barcelona, where she learned to use the artwork pre-press software and received press operator training. She now works in Nuprint’s HP Digital Department, producing high-spec labels, sleeves and wraparound labelling for a wide range of commercial clients. Keen to raise awareness of STEM careers and companies supporting young people like herself into employment, Lauren recently helped to develop Derry City & Strabane District Council’s Business Youth Charter. The initiative highlights those local businesses helping young people into work as well as informing young people about the companies and industries. Gavin Killeen, Managing Director of Nuprint, said Lauren was a “shining example of a female in a male-dominated print industry excelling and embracing STEM.” He added: “Eager to learn new skills and increase her expertise in print, Lauren is undaunted by the challenges we constantly throw her way. With her positive attitude, ability to work under pressure and her clear thinking, she embodies Nuprint’s values and has now set a high standard for all our apprentices, both female and male. Everyone at Nuprint is very proud of Lauren and we’re delighted her hard work has been rewarded with her success at the Irish Print Awards.”
ADVERTISEMENT - CONTINUE READING BELOW