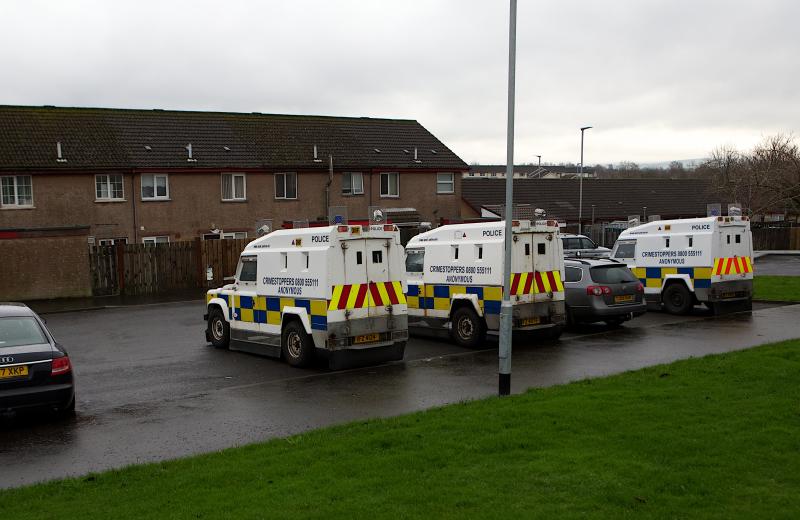 Three people have been arrested on suspicion of paramilitary activity in connection to INLA following a number of police operations in Derry yesterday. Two men aged 40 and 45 and a 57-year-old woman were arrested under the Terrorism Act by detectives earlier today. The suspects have been arrested on suspicion of paramilitary activity in connection to INLA and have been taken to Musgrave Street Police Station for questioning. A 56-year-old man was also arrested on Tuesday after 19,800 illegal cigarettes were seized from one of the shops in the Galliagh area of Derry. He has subsequently been released pending report to the Public Prosecution Service (PPS). A number of searches were also carried out in the Galliagh, Buncrana Road and Ballymagroarty areas in relation to INLA criminality including the supply of controlled drugs and illicit cigarettes, money laundering and a recent paramilitary style attack which took place on November 14 in the Ballymagroarty area of the city. A quantity of Class A and B drugs were seized from the search in the Galliagh area and a 17-year-old male has been arrested on suspicion of possession of the drugs with intent to supply. Quantities of suspected Class C Controlled drugs were also seized from the searches in the Ballymagroarty and Buncrana Road areas. Documentation, phones, computers and cash were also seized. This follows an operation on Tuesday, December 4, when PSNI supported HMRC officers to visit ten shops in the Derry and Strabane areas where approximately 36,000 illicit cigarettes and five kilograms of illicit tobacco were seized. Counterfeit clothing, footwear, DVDs and CDs were also seized from three of the shops. Brutality Detective Inspector Tom McClure of the PSNI’s Organised Crime Unit said: “These operations are further evidence of PSNI’s continuing commitment to tackling paramilitarism. “The INLA in Derry and Strabane claim to be protecting their communities from crime however in reality they themselves are heavily involved in a wide range of criminal money-making ‘rackets’ including extortion, supply of controlled drugs, counterfeit goods and money laundering. “As well as taking a cut from alleged local drug dealers (known locally as ‘pay-to-stay’) they are also supplying controlled drugs themselves. “INLA use brutality, threats and fear to exert control in their local communities and they recently carried out a paramilitary-style shooting of a man for having a minor altercation with INLA members. “We also believe they are heavily involved in the importation and supply of illicit cigarettes into the North West and for this reason we requested HMRC’s assistance for yesterday’s operation. He added: “I am very concerned that all ten shops visited yesterday in the area were found to have illicit cigarettes on their premises.” ABOVE - Police pictured in the Galliagh area earlier today.
ADVERTISEMENT - CONTINUE READING BELOW