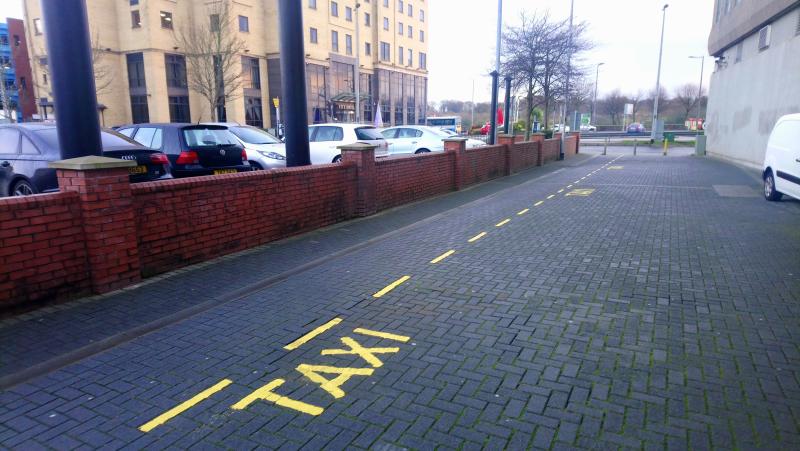 A new ‘alternative’ taxi rank is set to open at a side street in Derry’s city centre which up to now had been a pedestrianised zone. Police Court Street, which connects the Strand Road to Queens Quay, has now been designated as a taxi rank, with the spaces for the vehicles now marked on the paving stones, pictured above. In statement issued to the Derry News earlier this week, a spokesperson for the Department for Infrastructure (DfI) said the move had come after consultation with a number of organisations. “The Department has provided a taxi rank on Police Court Street following discussions with City Centre Initiative (CCI), North West Taxi Properties and independent taxi operators in the city,” a Departmental spokesperson said. “A formal consultation was carried out in June of this year. The new six bay taxi rank should be fully operational by Friday, December 7. “This rank will provide an alternative site for taxi operators to work from.” The spokesperson added that legislation had been amended to allow vehicles into a pedestrianised zone. “The legislation governing Police Court Street Pedestrian Zone has been amended to include an exception to permit taxis to wait in the taxi rank in Police Court Street for the taking up and setting down of persons,” the spokesperson continued. In March of this year, it also emerged that eleven new taxi ranks had been approved for Derry's city centre. The new taxi ranks have been put in place at the Waterloo Place/Strand Road area and consist of full-time and part-time ranks. The full-time rank will accommodate three taxis close to the junction of William Street and Waterloo Place, and replace a space previously used as a loading bay. The remaining two ranks meanwhile will function on a part-time basis, and accommodate eight taxis. These will operate from 10pm until 7am, and will operate as parking spaces from 7am until 10pm.
ADVERTISEMENT - CONTINUE READING BELOW