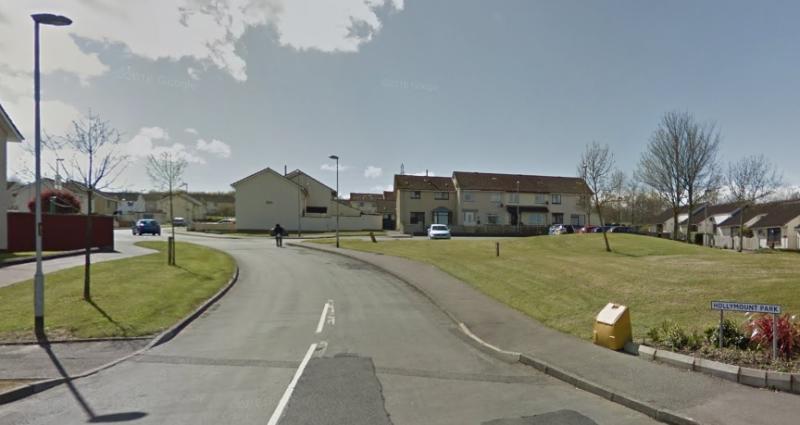 A man was forced to jump out of a first-floor window at a house in the Waterside after being threatened by a masked man armed with a handgun, a Derry court has heard. The details emerged at Derry Magistrates Court on Monday morning where four men appeared in connection with an incident in the Hollymount Park area of the Waterside (pictured above)in the early hours of Sunday, December 2. Wayne Campbell, 34, of Hawthorn Terrace is charged with aggravated burglary with intent to steal, while his brother Gavin Campbell, 31, of Cecilia's Walk is charged with aggravated burglary with intent, driving while disqualified and having no insurance. Nathan Doyle, 21, of Helen Street, is charged with aiding and abetting an aggravated burglary, possessing a firearm or imitation weapon and possessing a baton. Also appearing before the court was Eamonn Kelly, 25, of Ballymagowan Avenue, who was charged with aggravated burglary. A police officer told the court he could connect the four men to the charges and opposed bail for fear of further offences. He told the court that police received a 999 call from a woman who claimed a man had forced entry into her house seeking her partner. The male occupant of the house told police he had been asleep when he heard a knock at the door and looked out of the window, where he saw a man with a mask and what appeared to be a pistol. The man was alleged to have pointed the gun and shouted: “Get down here and bring drugs.” The masked man was said to have then shouted: “Get down here give us the drugs or we are coming in.” The court was told the male occupant of the house told his partner to phone the police and then jumped out a first floor window. The woman told police she was there with her two children aged two and four, and heard her partner talking out the window. She said she then heard a bang at the front door and a masked man carrying a gun came up the stairs. The woman used the bedroom door in an attempt to protect herself and threw the phone on the bed while still connected to the police. The masked man wielding the gun was then alleged to have asked where the man had gone, then left the property before fleeing the scene in a white jeep type-vehicle. The court was told that at 6.30am, police attended an address where the last registered owner of the white jeep lived. Cocaine Gavin Campbell, Doyle and Kelly came out of the property to get a taxi after police arrived. Doyle was found to have a pellet gun and a baton on him. Doyle told police himself and Kelly had been drinking and taking cocaine and got into a jeep with two men they never met before. He told police they had gone to his home where he got a pellet gun and baton and left them on the backseat of the car. He said while driving with the men he noticed a woman in a distressed state on Craigavon Bridge and he got out of the vehicle and attended to her. The police officer said they accepted Doyle was not present during the actual incident. Kelly told police that two males said someone owed them money and he went with them. He said he had knocked on the door then saw the man behind him with a mask and a gun who shouted: “This is the IRA, give us the drugs.' The court was told some of his account was 'confused.' Both Campbells denied all the allegations and said they were in their beds sleeping at the time of the alleged incident. Previous convictions The police officer said it was 'a very strange set of circumstances' and while he accepted Doyle had stopped at the bridge he said he was part of aggravated burglary. The court heard Doyle and Kelly had clear records while Gavin Campbell had 21 previous convictions while Wayne Campbell had 37 previous convictions. The police officer said the occupants of the house were ‘fearful’ and the woman was unsure if she would return to that address. Paddy MacDermott, defence solicitor for the Campbell brothers, said that the police had not definitively linked Gavin Campbell's car to the incident. He said the police case against his clients was ‘circumstantial’ and applied for bail. A barrister for Doyle and Kelly said they could be managed with conditions. Judge McElholm said it was ‘clear something happened but why it happened was another matter’. He added: "I do know there was a four-year-old and a two-year-old there. “I also know there are too many incidents of this type in this city and too many people think they can take the law into their own hands. “The message has to go out this will not be tolerated.” He refused bail and remanded all four in custody to appear again on December 27.
ADVERTISEMENT
Advertise with Us
ADVERTISEMENT
Advertise with Us
ADVERTISEMENT
Advertise with Us
ADVERTISEMENT
Advertise with Us