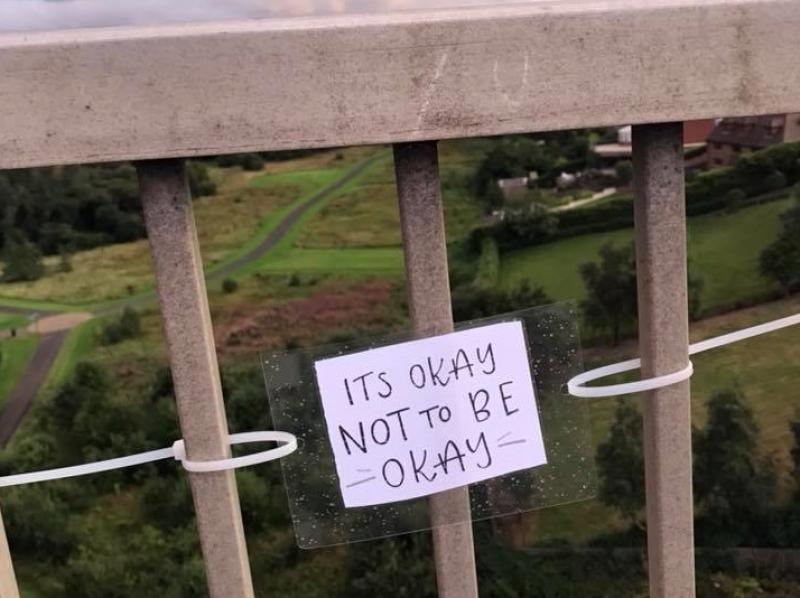 A proposal to remove the so-called 'Messages of Hope' and other memorabilia from the Foyle Bridge and riverfront area in Derry has been delayed due to concerns over the impact it would have on grieving families in the run-up to Christmas. The recommendation came before this afternoon's meeting of Derry City and Strabane District Council's Health and Community committee, held in the Guildhall. At the meeting, a report was presented to councillors from the Derry City and Strabane District Civic Forum (Suicide Prevention), which works with a range of statutory agencies and groups within the community and voluntary sector to address issues relating to alcohol, drugs, emotional wellbeing and suicide prevention and homelessness. Seamus Donaghy, Head of Health and Community Wellbeing with the council outlined the contents of the report, which stated that health professionals involved in suicide prevention have said there is 'strong evidence' showing that when a method or location of suicide or suicidal behaviour is highlighted or reported, that 'vulnerable people can be influenced, and that this can lead to an increase in copycat behaviour'. The report added that there have been reports of members of the public and school children travelling to the bridges in groups to place messages there for people who are suicidal. "This is regarded as very unsafe, as not only does it link a location and method with suicide, but also it gives the impression that people who are suicidal should go there to see the messages," the report continued. "The evidence suggests that this increases the likelihood that people will engage in suicidal behaviour at these sites." It added that such activities could have a 'contagion effect' which leads to additional cases of suicidal behaviour in people who would not otherwise engage in this type of behaviour. Mr Donaghy added that the Civic Forum grouping including the Public Health Agency (PHA) and Ulster University have, after careful consideration, reached an 'informed decision that handcrafted messages and items of clothing attached to the riverfront and bridges should be removed, in the interests of public safety'. The meeting then heard from Shauna Houston from the Public Health Agency (PHA), who said that 'local data', such as that gleaned from CCTV and rescue services, had shown that there had been an increase of incidents on the bridges since the messages were put up. She continued that 'access to means' was one of the 'biggest ways of preventing suicide', before adding that the messages and items of clothing should now be removed. However, the independent councillor Warren Robinson proposed that council take no action until they consult with grieving families and members of the public who are placing the messages and items of clothing on the riverfront and the bridges, and get feedback from them. His concerns were echoed by the Sinn Fein councillor Sandra Duffy, who said that while she agreed with the opinion of the health experts, there should a 'discussion with the families before the removal'. The SDLP's Martin Reilly added that if council were to approve the move, then the items would effectively be removed 'just days before Christmas' and raised concerns over the emotional impact of this on families who have lost loved ones. Commenting, the DUP's Drew Thompson said that council had previously removed something from the bridge which was then put again the following day, and urged council to exercise caution in the matter given it was in the run-up to Christmas. A further warning was sounded by the independent councillor Gary Donnelly, who said it was a 'very emotive and sensitive issue' and that council had 'made a bad decision' before, and then seconded Cllr Robinson's proposal. Responding to the concerns, Ms Houston said that it was not about 'preventing people from memorialising their loved ones', but doing it in such a way that is 'safe for other people who may be vulnerable'. An amended proposal was then put forward by Cllr Duffy which called on the council not to take any action until a 12 week consultation on the move was completed, which was then approved.
ADVERTISEMENT - CONTINUE READING BELOW