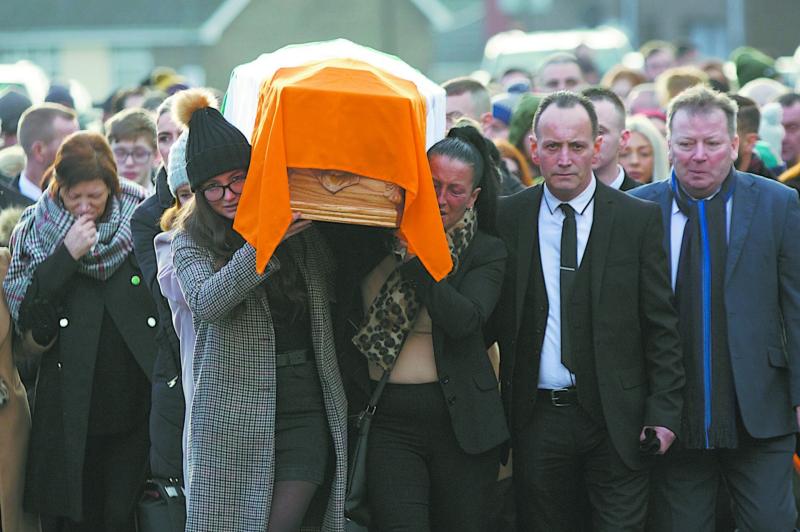 A priest has condemned the murder of Derry father-of-nine, Eddie Meenan, and described it as a ‘crime beyond words’ which brought ‘untold pain and hurt’. Father Patrick Lagan, speaking at Mr Meenan’s Requiem Mass, said that for Eddie’s mother, Nancy, and the extended family, the past couple of weeks have been ‘filled with grief and sorrow’. Mr Meenan was found dead in an alleyway off Creggan Street in the city on November 25. Police say the 52-year-old suffered 'significant' head and body injuries. Three people have been charged with his murder and investigations are ongoing. The funeral Mass was held at St. Eugene’s Cathedral on Saturday at 12.30pm - just yards from where he was murdered. Around 12.15pm, his coffin was carried the short distance from his mother’s home at Little Diamond to St. Eugene’s Cathedral for Requiem Mass. Mr Meenan’s coffin was draped in the tricolour and young family members held Irish flags as they made their way to the church. The local shop on Creggan Street remained closed as the funeral procession made its way in to the church and local residents stood outside to pay the respects. In his homily, Fr. Lagan spoke of Eddie’s love for his family and described him as a gifted brother and friend. “The love of a Mother reminds us of that same embrace of God’s mercy which awaits us all. “For Eddie, this grace was especially present, through the love of his own mother Nancy, his closeness to his Brother Gary, and other family members. Eddie brought joy to many who knew and loved him. He was a character who, I’m told, could turn his hand to anything. He was a gifted brother and friend who had a ready smile and a happy go lucky approach to life. “He lived a straightforward, quite simple kind of life without any fuss. His sense of humour enabled him to shoulder the burdens and cares of life. Each day, started with a smile to his mother, and ended with those faithful words: Good Night and God Bless.” The death of his brother just over two years ago was described as a great sorrow. “He carried this cross with his usual determination that enabled him to understand that this life, with its many limitations and sorrows is not the end, hope always prevails. A hope which strengths us and calls us to look towards a greater love which is found in God the Father,” Fr. Lagan said. He went on to say that the murder of Mr Meenan on the night of Saturday, November 24, ‘shocked the community’ and brought ‘untold pain and hurt’ not only to his family but to all who knew him. “This senseless taking of an innocent human life is a crime beyond words, a pain which no family should ever have to carry. “In this last week, many neighbours and those in the local community have offered their support and prayers and walked with you, the Meenan family, as you mourn the loss of Eddie. The hurt of loss is the cost of loving, it is the pain that we experience when a Son, Father, Brother, Uncle and Friend is taken from us. “Our role this morning as we offer the greatest prayer of the Church on his behalf, is to commend him to God whose great love and mercy inspired the writer Henri Nouwen, and has captivated countless souls down through the ages. God’s love gives us hope to persevere at this sad time,” he added. Pictured above: The coffin, draped in the Tricolour, of murdered victim Eddie Meenan is carried from his mother's home in the Little Diamond to St. Eugene's Cathedral. (Photo - Tom Heaney, nwpresspics)
ADVERTISEMENT - CONTINUE READING BELOW