Derry lollipop man Michael is officially top of the pops! 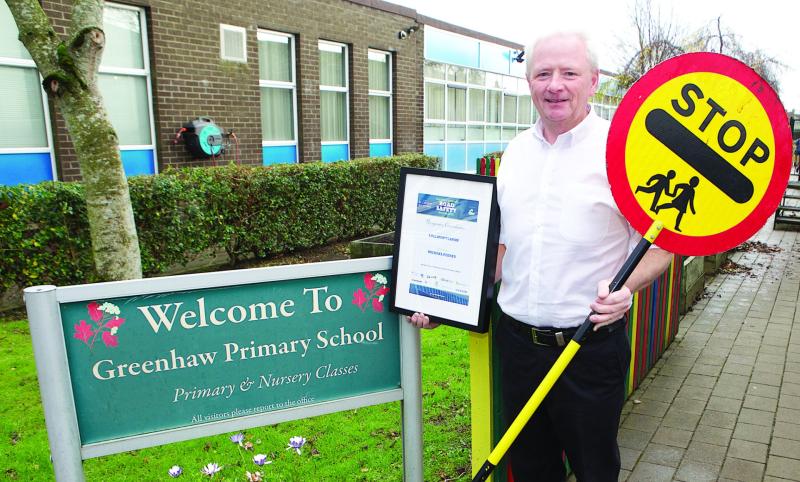 A DERRY lollipop man has been honoured for his contribution to road safety both inside and outside his school. Michael Feeney from Greenhaw Primary School was named Northern Ireland Road Safety’s 2018 Lollipop Person of the Year at a recent ceremony. Before taking up his current post, he worked as Chief Fire Officer at City of Derry Airport for 31 years. “The biggest thing about my retirement was that feeling of ‘what next?’,” explained Mr Feeney. “I wanted to do something community orientated and that built on my background in fire safety.” Since taking up the job at Greenhaw Primary School four years ago Mr Feeney has become a familiar face in the neighbourhood. “I’ve been very, very fortunate to be here at Greenhaw and become part of the community. “I get so much out of it. I’m doing it for the children, that’s what makes me want to do my job.” “The parents, children and staff have been so good to me and the local motorists have been very good to work along with me to keep the children safe.” I addition to his work at the school gates, Mr Feeney also carries out road safety projects with Greenhaw Primary School and Nursery School and other local schools to teach children about road safety. And in his spare time he is a drummer with local band ‘Bad Medicine’ and helped start an auxiliary fire brigade in Donegal through the Civil Defence. He says the award was an expected joy. “It was lovely to get the award, I was very humbled. “I would like to thank Linda Heaney for putting me forward and all the principal and all the staff at the school for their support.” Greenhaw Principal Mr Shaun McLaughlin paid tribute to Mr Feeney. “It is a massive award for Michael and it is also a huge accolade for the school to have someone of his calibre who is so passionate about his job and the children in his care,” he said. “He takes being a road crossing patrol officer to the next level and, not only does he provide an excellent service for the school he also provides in- school support to our children and teachers on both road safety and fire safety. “It is a privilege to have him as a member of staff and we would like to thank him as a school community for all his work and look forward to working with him for any years to come.”
ADVERTISEMENT - CONTINUE READING BELOW