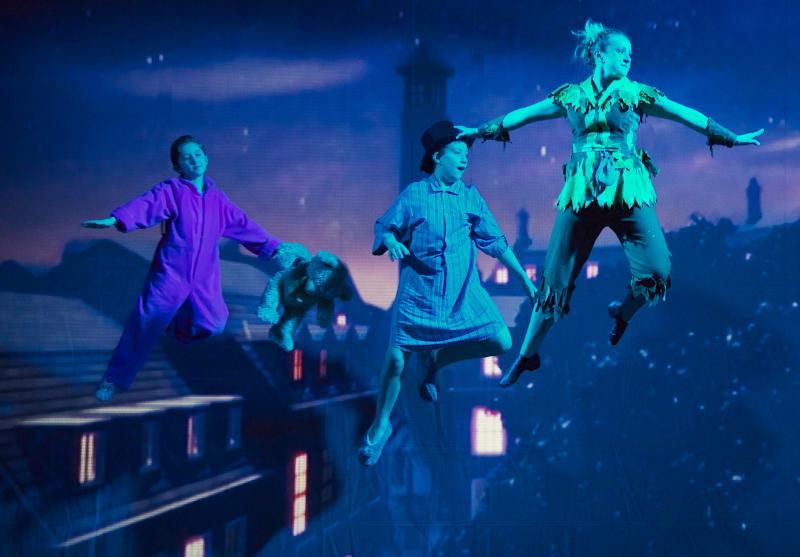 This year’s panto at Derry’s largest theatre is headed up by a local woman who has been captivating audiences with her sparkling performance as Peter Pan. Professionally trained singer and actor Ellen Hasson is no stranger to the Millennium Forum having starred in six previous pantomimes, but this is her first time taking centre stage. And she certainly doesn’t disappoint, belting out the crow pleasing tunes with ease even whilst whizzing about the stage on invisible wires. It’s no surprise to learn that Ellen, who is the granddaughter of celebrated Derry Tenor Larry Hasson, has previously worked as a backing and recording vocalist on Britain’s Got Talent. The roles of Michael and John Darling and the Lost Boys were also played by Derry actors and it is an added bonus to hear local accents on stage. Special mention must also go to William Caulfield as Captain Hook, who proved he is as equally at home playing the dastardly villain as he is playing the pantomime Dame. His quick wit and caustic ad libs kept everyone laughing, but there was plenty more to delight the audience with spectacular song and dance routines and fabulous sets, costumes and special effects. The hugely talented Northern Irish cast also includes Conor O’Kane as the Hook’s sidekick Smee, Annie McCarroll as Wendy and Kathryn Rutherford as Tiger Lily. The Forum’s Chief Executive and writer and producer of the show David McLaughlin said local audiences should be prepared to be wowed. “This year’s show, once again, continues the Millennium Forum’s tradition of producing outstanding quality and value-for-money entertainment for everyone this Christmas. “Join us and 30,000 other guests for the biggest show in the city’s festive calendar for guaranteed fun for all the family. “Proudly sponsored by the Richmond Centre, Peter Pan at the Millennium Forum is packed with fantasy, bucketfuls of fun and amazing flying stunts. “With a powerful mix of celebrity, music, dance and plenty of audience participation, it's guaranteed to entertain and delight children of all ages.” Peter Pan performs at the Millennium Forum from Fri 30 th Nov to Sun 30 th December.  Tickets are now available from the Box Office and are priced from £10.50.  Telephone 71 264455 or visit  millenniumforum.co.uk for bookings.  Relaxed Performance and Dementia Friendly Performance takes place on Sun 9 th Decemeber at 2.30pm. Signed Performance is on Thurs 6 th December at 7pm.
ADVERTISEMENT - CONTINUE READING BELOW