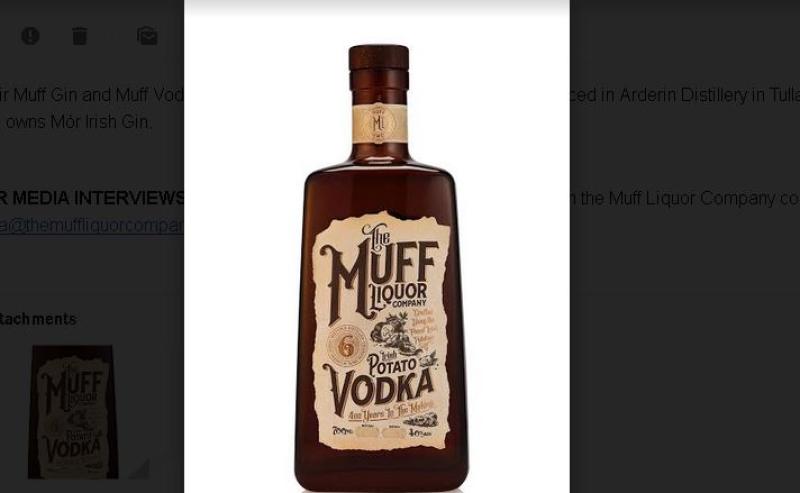 First there was Muff Gin, but now it has been joined by Muff Vodka. And this new premium craft drink from Donegal is set to hit the shelves across Ireland and the UK this weekend. Inishowen based craft drinks company The Muff Liquor Company has announced the launch of its new premium craft potato vodka. Muff Vodka is the latest product creation from the Muff Liquor Company and comes less than a year since their hugely successful launch of their craft potato gin that has taken the Irish and UK spirit drinks markets by storm. The Muff Liquor Company is the brainchild of Inishowen born entrepreneur Laura Bonner and her business partner Tom Russell from Manchester and since its inception back in February 2017, the company’s specialist distilled spirit has caught the imagination and taste buds of novice and seasoned gin drinkers alike, thanks to their inventive take on a classic distilled gin. The company is hugely excited to bring their unique tasting Muff Vodka into the market in the run up to Christmas and are overwhelmed with the level of interest in the new drink to date, with the first shipment already selling out. Described as being “creamy, earthy and smooth”, Muff Vodka gets its unique taste from being distilled six times using four types of Irish potato with a hint of vanilla. The launch of this exciting new product comes less than a week after the company’s success in Dublin, when it secured a Business All-Star Accreditation from the All Ireland Business Foundation in recognition of their business success. The Business All-Star accreditation is awarded to progressive indigenous Irish businesses that meet the highest standards of verified performance, trust and customer centricity. Company co-owner Laura Bonner said it’s a hugely exciting time for the company and despite being in its infancy, she says the company has gone from strength to strength not only in getting their Muff Gin brand and product widely recognised across the industry but in developing the company’s reputation, client base and securing investment.
ADVERTISEMENT - CONTINUE READING BELOW