'You Are Now Entering Free Derry': Man who painted iconic slogan passes away 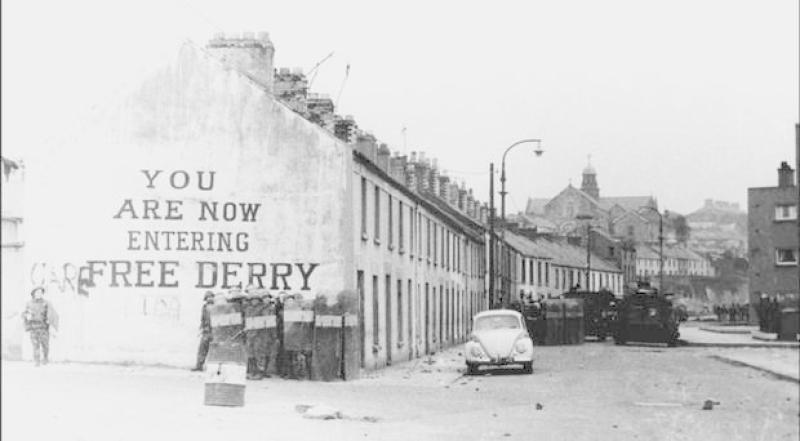 One of the leading figures of the Civil Rights era has paid tribute to the man responsible for the painting of perhaps the most iconic slogan of the Troubles. Liam Hillen who passed away aged 69 after a period of illness on Christmas Day was the person who placed the slogan ‘You Are Now Entering Free Derry’ on the gable end of a house in Derry’s Bogside in the very early days of 1969. Eamonn McCann told the Derry News: “The logo was painted up around 3am on the morning of January 5, 1969. “There was riot and general tumult in the city because the People’s Democracy march had arrived after being attacked all the way from Belfast. “As often happened the action spread from the city centre to the Bogside.In fact there had been a period of very fierce fighting, but by around 3am the RUC had gone away. “Then there was a discussion about what we should do next. We had some frivolous suggestions about painting slogans such as ‘We Want Free Beer’ and ‘We Want Better Odds’. But the conversation then got a bit more serious and I came up with ‘You Are Now Entering Free Derry’ simply because I stole the idea from an image I’d seen on a TV news programme. “It was the era of world wide student uprising and students had occupied Berkeley University in California. On the news I’d seen a placard which said ‘You Are Now Entering Free Berkeley.’ I suggested ‘Free Derry’and within a few minutes, Liam had painted it on the wall.” However, a misunderstanding meant that for many years that Liam Hillen’s contribution, unlike the iconic slogan, was temporarily erased from history. Eamonn McCann continued: “I’d forgotten many details of the incident until Liam approached me in a pub in Waterloo Street years later and said ‘I’ve a bone to pick with you.’ “I’d attributed the painting of the slogan to a completely different person altogether. I really couldn’t remember until Liam reminded me that he’d asked me if there was one or two letter ‘R’s’ in the spelling of ‘entering’. “Then I instantly remembered that it was indeed Liam who painted the slogan first. “Liam was a very modest man. Free Derry Wall of course has become an icon. It’s incredibly famous which in itself is a very remarkable thing. Tourists come to Derry to see it every day. “Liam was also remarkably lacking in bitterness. There are many people who would have proclaimed such an action from the rooftops. He didn’t want any of that, he just wanted to put the record straight.” Just before Christmas, Eamonn McCann launched a new edition of his 1973 work, ‘War and an Irish Town’-a book which examines the early days of the Troubles in Derry. In the preface to the work, McCann fully credits Liam Hillen with being the first man to paint the iconic slogan. “I was very pleased to set the record straight,” he said.
ADVERTISEMENT - CONTINUE READING BELOW