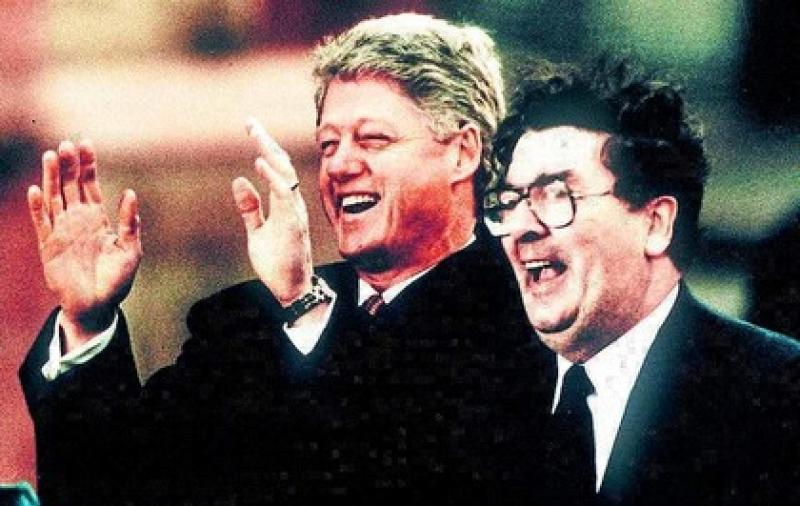 The papers, centered on the mid 1990s reveal a turbulent period not just for the Nobel prizewinner but for the political scene in Ireland overall as momentum built towards the eventual peace agreement of 1998.

Prior to this however in 1988 a torrid meeting between the SDLP and then Secretary of State for Northern Ireland Tom King over the issue of devolution ended in acrimony.

Details of the meeting that March were later relayed by John Hume to Irish Government official Declan O'Donovan. The then Foyle MP described the encounter as "very bad" despite "upbeat reports" in the media.

O'Donovan reported to his colleague Dermot Gallagher that the SDLP delegation were 'shell shocked' and that Hume felt that King was 'threatening' to 'bounce' them into support for devolution without any desire to consider the nationalist party's strategy.

According to the state papers the meeting concluded abruptly when Austin Currie asked a question but Tom King stood up and said 'that's it' before quickly leaving the room.

Papers from 1994 also released revealed some details of discussions between John Hume and Northern Ireland Office officials on the issue of ever deteriorating inter-communal relations between Catholics and Protestants in Derry.

The issue of members of the Protestant community leaving the city's West Bank of the city had been ongoing since the early 1970s as the Provisional IRA increased their capacity to attack local members of security forces and city centre businesses alike.

Historian Dr Eamon Phoenix summed up Mr Hume's concerns by saying he felt that: "Something would have to be done for the 1,300 Protestants reaming on the Waterside. They had to stop this flow, they had to preserve this ethos. It wouldn't be good to have a segregated city because there was a fear that Derry-Londonderry was becoming a 'tale of two cities' at this particular time with separate schools and even hospitals and social security centres."

State papers from 1993 also revealed that the unionist community had benefited from IRA violence and were still highly angered by the Anglo-Irish Agreement eight years earlier in 1985.

The British Government of the early 90s were alarmed by the contents of two reports. One report by a US diplomat pointed to widespread alienation and a "sense of betrayal" among unionists. The second report, compiled by academics at the University of Ulster which stated that the unionist community was unhappy with talks between John Hume andSinn Fein's Gerry Adams.

The University of Ulster report contained interviews with religious leaders, community activists and business figures across the North. The report found that unionists wanted rid of the 1985 accord and to ignore both Adams and the Irish Government and construct a peace deal which "respected the views of the Protestant majority."

The academic report also revealed a dislike of fair employment legislation amongst the unionist community and a belief that Protestants were now being discriminated against.

Unionists also felt that the Anglo-Irish Agreement had shattered the 'contract' between them and Britain.

The report said: "It is clear that the position of John Hume is central to Protestant thinking. He is always referred to as a figure of power-almost superstitiously. The implication is that he is very clever…and not be trusted."

In March, 1993 a note by United States diplomat Doug Archard relayed to the Northern Ireland Office said: "Protestants now believe republican violence had paid in terms of both advancing the nationalist political agenda and seeing more resources under government schemes such as targeting social need."

The U.S. diplomat said he had a degree of sympathy with the unionist sense of alienation and also stated:"Even when the Protestant community organized itself to promote development in loyalist areas, ministers, senior officials and unionist MPs were noticeable by their absence."

Doug Archard added that he had tried to persuade officials in the Republic's Department of Foreign Affairs of the true "extent of unease" in the unionist community but was "dismayed" to find the Dublin administration "dismissive" of the concerns.

Mr Hume told Sir John Chilcot, head of the Northern Ireland Office he was concerned by the speed of the decision and that in his view prisoner releases were "all things that needed to settled down the road."

The papers show that the DUP's Sammy Wilson said the burgeoning peace process "was a surrender process".

British Ambassador in Dublin David Blatherwick reported that the list of released IRA prisoners did not include Thomas McMahon who was jailed for the murder of Lord Mountbatten in 1979 nor Nessan Quinlivan or Pearse McAuley who had shot a civilian during their escape from Brixton prison in 1991.

Blatherwick also noted that loyalist intermediary, Rev Roy Magee and PUP leader David Ervine agreed the British Government should consider phased releases of all prisoners on licence. The PUP leader was reported by the British diplomat as saying that prisoner releases "would cement the peace, although he acknowledged it would face mammoth emotional difficulties."

In other papers, one of John Hume's closest allies, President Bill Clinton also came in for heavy criticism from unionist quarters.

Clinton would visit Derry in a famed visit organized by Hume in 1995. However, in 1992 his election caused concern to Northern Ireland Secretary of State, Sir Patrick Mayhew and his officials in the Northern Ireland Office.

One of Mayhew's officials told him that Clinton "has been more forthcoming to the Irish-American nationalist constituency than we would have ideally wished."

The official added:"It would be prudent to anticipate that we will at least face some difficulty with a Clinton administration."

President Clinton had already publicly backed the appointment of an American peace envoy to the North and that he backed the McBride Principles-a code of conduct for US companies conducting business in Northern Ireland.

The British also tried to impress upon Clinton's foreign policy adviser Nancy Soderberg the president should not "make reference to wanton abuses by the security forces without setting it in context of the terrorist campaigns of the IRA and Protestant paramilitaries."

The UK Embassy in Washington, say the released documents, made it plain to the administration in Washington that "NI was part of the UK" and solutions to its problems could not be imposed from outside.

Ambassador Sir Robin Renwick also urged Washington not to "pursue the idea of a peace envoy."

In 1995, Senator George Mitchell was appointed as an economic envoy to Ireland and later chaired the multi-party talks which resulted in the 1998 Good Friday Agreement.