50 years since Burntollet: ‘There’s a fella lying down there and he’s half-dead. And not one policeman in sight’ 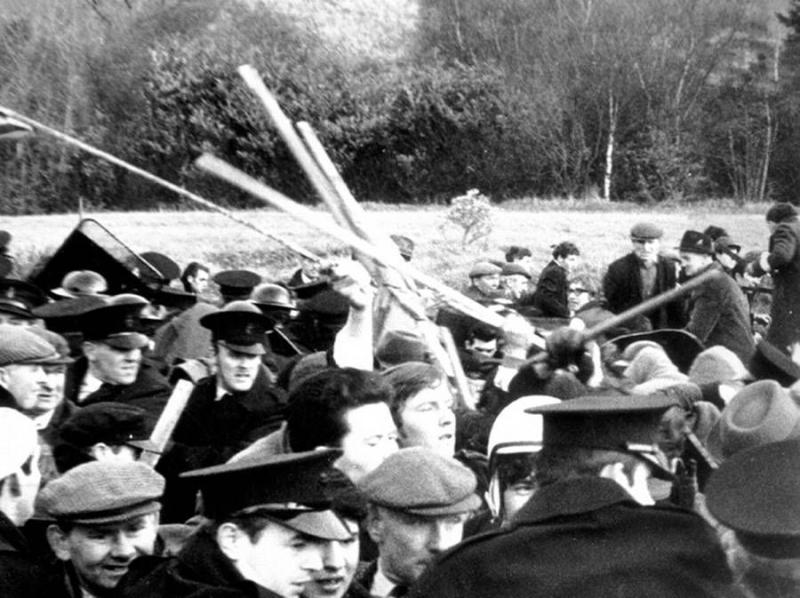 RTE captured the events at Burntollet in January of 1969 and the Irish state broadcaster also carried statements from some of the marchers at the scene who described how they were attacked and also the failure of the police to protect them.

One young woman said: “We were down in the muck in the river, then they started throwing stones.

“I was in under a tree. One person picked me up, but the men tripped me and started hitting me and calling us Fenian ‘b’s’ and all the rest of it.

“Not one policeman did anything. They are all standing up that road at that church.

“The police did absolutely nothing. We walked into the field to try and keep away from the violence, not to throw stones. We walked in and we were hedged up behind a river.

“We had to get into the river, but they came after us. We tried to get up the back fields to get away from them, but they surrounded us in the back fields. We waded in and out of the river about half-a-dozen times to our waists.

Another witness, a young male said: “I was standing across the road and they started firing bottles and stones and all sorts of weapons. There was a boy along with me and he got hit with a bottle and it broke when it hit his head. He was bleeding like anything.”

Following the loyalist attack at Burntollet Bridge, People’s Democracy leader Michael Farrell spoke with the RUC.  And, after this Mr Farrell is seen addressing the marchers through a loud hailer.

He said: “The road ahead is clear. The vast bulk of our marchers have now rejoined us. I have spoken to the police and there are about 80 people left behind. They (the RUC) people through.”

Although Michael Farrell relayed the assurances of safety from the RUC to the marchers, their words were met with derision from the remaining demonstrators. Nevertheless, the march continued to move towards its planned destination in Derry city centre.

However, as the march entered the city it was attacked again at the Irish Street estate in the Waterside. But, when the marchers finally reached Guildhall Square, an estimated 5,000 gathered to greet them in triumph.

An impromptu rally was addressed by a number of civil rights leaders, including Eamonn McCann.

The day before the march arrived in Derry it transpired that Major Ronald Bunting and Ian Paisley were conducting a meeting of their loyalist supporters inside the Guildhall itself.

Despite the efforts of the RUC to disperse the rally outside, including the use of water cannon and pleas from the civil rights leaders that any violence would harm their cause, the crowd grew increasingly hostile.

Major Bunting’s car was overturned and set on fire and there was damage to shop fronts.

The subsequent entry of the RUC into the Bogside area of the city, led to serious rioting.

The ferocity of the street violence in Derry and other parts of the North, led to Northern Ireland Prime Minister, Terrence O’Neill to make a statement on Sunday, January 5.

O’Neill told the press: “I want the people of Ulster to understand in plain terms events which have taken place since January 1st.

“The march to Londonderry planned by the People's Democracy was, from the outset, a foolhardy and irresponsible undertaking. At best, those who planned it were careless of the effects it would have, at worst, they embraced with enthusiasm the prospect of adverse publicity causing further damage to the interests of Northern Ireland as a whole....

“Clearly Ulster has now had enough, We are all sick of marchers and counter-marchers. Unless these warring minorities rapidly return to their senses we will have to consider a further reinforcement of the regular police by greater use of the Special constabulary for normal police duties….

“I think we must also have an urgent look at the Public Order Act itself to see whether we ought to ask Parliament for further powers to control those elements which are seeking to hold the entire community to ransom.

“Enough is enough. We have heard sufficient for now about Civil rights, let us hear a little about civic responsibility. For it is a short step from the throwing of paving stones to the laying of tombstones and I for one can think of no cause in Ulster today which will he advanced by the death of a single Ulsterman.”

On January 15, O’Neill also announced the setting up of an official inquiry into the disturbances in Derry and elsewhere. The inquiry, under the chairmanship of Lord Cameron, a Scottish judge, was to look into the causes of the civil unrest.

When Cameron issued his report in September of 1969 part of it addressed the ‘Causesof the Disorders’ and stated: “From the narrative of events, and the comments which we have made in the course of the narrative, it will be clear that the immediate causes of the outbreaks of violence which began on 5th October 1968, and their continuance thereafter, arose from a wide variety of sources. Some and not the least powerful, as we have found, are deep-rooted in the continuing pressure, in particular among Catholic members of the community, of a sense of resentment and frustration at the failure of representations for the remedy of social, economic and political grievances.

“On the other hand, among Protestants, equally deep-rooted suspicions and fears of political and economic domination by a future Catholic majority in the population calculated to build-up a dangerous, and politically explosive, sectarian tension. The friction generated by these differences, fears and resentments produced tensions which undoubtedly played an immediate and continuing part in producing the agitations which led to the violence of 5th October and thereafter.

“What was considered by many Catholics and others who had been pressing for certain political reforms as the failure or delay of Government to match promise and performance, introduced an element of disappointed expectation into the political atmosphere in the early summer months of 1968.

“In addition, we do not think it is wholly accidental that the events of last Autumn occurred at a time when throughout Europe, as well as in America, a wave of reaction against constituted authority in all its aspects, and in particular in the world of universities and colleges, was making itself manifest in violent protests, marches and street demonstrations of all kinds. The psychological effect of this example in other countries and other circumstances cannot be discounted.”