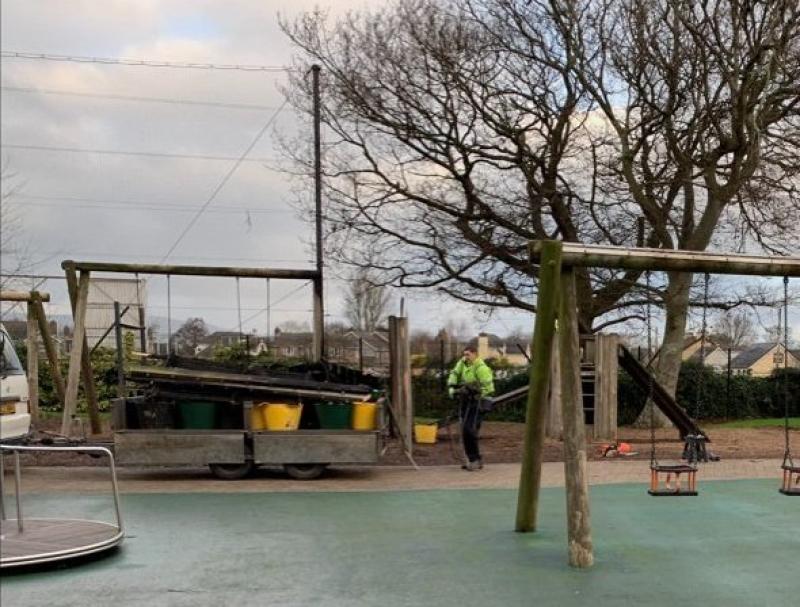 An Independent Unionist representative on Derry City and Strabane District Council has said the local authority is working as hard to reopen a play park at Eglinton as soon as possible.

The play facility at the County Derry village was extensively damaged by a fire at some point between Saturday night and Sunday morning. A 15-year-old boy arrested on suspicion of arson was later released on bail by the PSNI pending further enquiries.

Alderman Maurice Devenney said: “First of all I condemn what happened. The play park is a much needed facility for young children in Eglinton who now obviously won’t be able to access it until repairs are carried out.

“I commend the PSNI for moving quickly in the matter. An arrest has been made and having visited the area that’s something that I know the people there are happy about.

“I have also spoken to council officers who have begun the process of removing the damaged equipment in the hope of getting the park open as soon as possible.

“Of course however this will be a matter of processing insurance claims and so on before the equipment can be replaced.”

Yesterday, a spokesperson for Derry City and Strabane District Council said the play park will remain closed until health and safety issues can be fully assessed.

The spokesperson said: “The park has been closed in the interests of health and safety and to allow council officials and the PSNI to determine the extent of the damage.”

Appealing to the public with any information into the attack to come forward the Council spokesperson said it would be working closely with the PSNI on the investigation.

CAPTION: Council workers have already begun the process of removing damaged equipment from the play park in Eglinton.
ADVERTISEMENT - CONTINUE READING BELOW