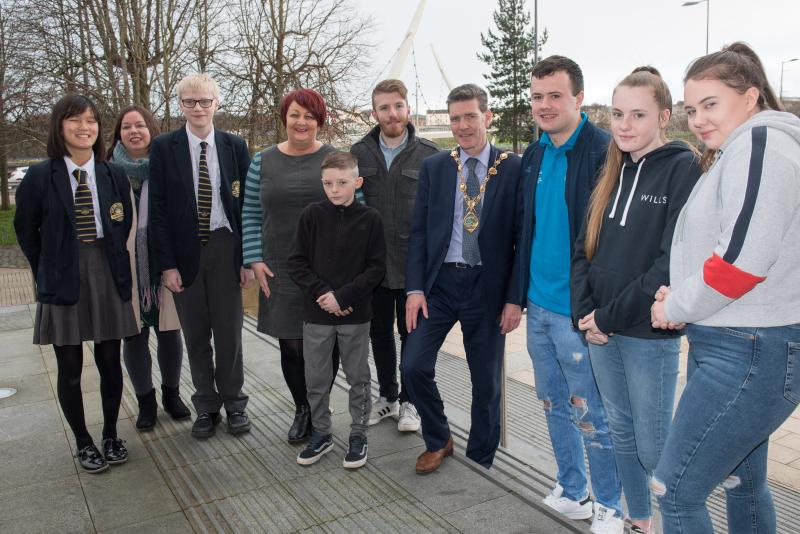 Twenty-six groups from across the Derry City & Strabane District Council area have been awarded a total of £50k funding to help ‘Make.Change.Happen’ through a series of projects run by young people that will make a positive impact in their local community.

The ‘Change Something’ initiative is jointly funded by Council and the Big Lottery Fund as part of ‘Youth 19’ – a year dedicated to young people in the North West – and is being delivered by the Community Foundation for Northern Ireland's Acorn Fund.

The first open call for applications to the ‘Change Something Fund’ was launched in mid-October 2018 – with a new judging panel comprising of young people aged 13-24 having recently awarded the first round of grants.

The grants will now fund ambitious projects during ‘Youth 19’ – including the development of a cross-community Youth Café, a schools’ recycling initiative and a number of programmes focusing on the mental health and wellbeing of young people throughout the City & District.

Welcoming the awarding of the first round of grants from the ‘Change Something Fund’, Mayor of Derry City and Strabane District Council, Cllr John Boyle said: “I’m delighted that the new ‘Change Something’ judging panel have awarded local groups the grants to develop these worthwhile projects.

“Indeed, this fantastic initiative allows for young people to take a lead role in creating some very special projects and activities which will sit alongside a programme of Youth 19 events that have the priorities, needs and rights of young people at their core.

“The Change Something Fund not only allows our young people to be the change they want to see in their communities, but also to take ownership of Youth 19 by turning their imaginative proposals into reality.

“I’m also really looking forward to visiting some of the groups who successfully applied to the fund and meeting up with the young people who will be helping to bring positive change to their community”.

“We support great projects that come from ideas from local people, bring people together and help communities to thrive across Northern Ireland, and the Change Something Fund is allowing us to do that with young people in the North West.

“We’re also really excited to see National Lottery funding supporting young people to be the change they want to see in their communities.”

And, Derry City and Strabane District Council’s Children & Young Peoples Officer Claire Lynch added: “The ‘Change Something’ project is a great opportunity for young people throughout the District to shape the future of the North West.

“As evidenced in the really fantastic response to the first round of grants and the wide-ranging projects which have now been awarded funding, we have a young and vibrant population who have so much to offer in terms of ideas and hopes for the City and District.

“I’m also delighted that we now have a team in place to ensure that all Change Something & Youth 19 projects have the views, needs and priorities of young people at the heart of programming.”

Shauna Kelpie, Acorn Fund Development and Support Officer said: “In celebration of Youth 2019, The Acorn Fund is delighted that the Change Something Fund is helping young people bring their hopes and aspirations to life – and empowering them to make a positive impact in their local areas. We’ve been supporting communities in the North West since 2014 and are looking forward to using our local knowledge and expertise throughout Youth 19 to help put our young people in the lead on this exciting project.”

The second open call for grants to the Change Something Fund – which particularly welcomes applications from rural areas of the District and will see an additional £50k awarded to local groups – will open on Monday 11 March 2019.

For further information on the Change Something Fund visit www.derrystrabane.com/changesomething