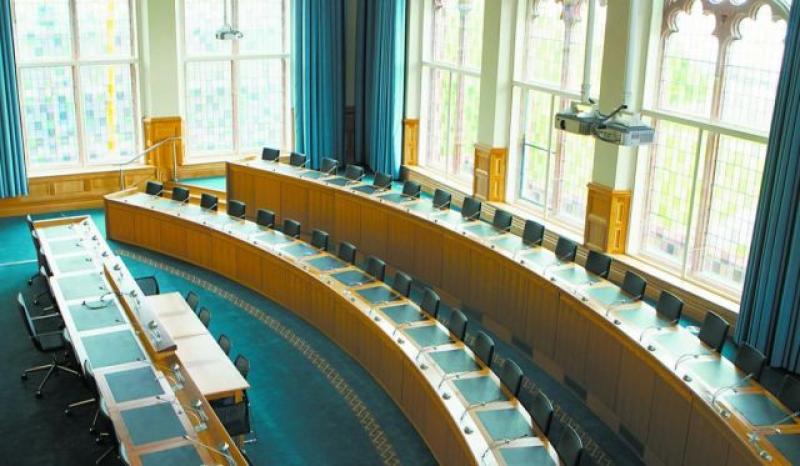 A majority of Derry and Strabane councillors have supported a motion which condemned all violence ‘past or present’ in the city, at today’s council meeting. Votes for and against were split evenly, however, Mayor of Derry City and Strabane District Council, John Boyle, cast the deciding vote in favour. Sinn Féin sought a suspension of standing orders at today’s meeting to allow a discussion on the recent disruption in the city. Rates planning meetings are normally held in confidential session, but a suspension of standing orders meant the media were permitted to attend. Sinn Féin Councillor Sandra Duffy tabled a motion for Council to ‘oppose recent attacks carried out in the city and call on those responsible to stop these actions immediately.’ Referring to the weekend car bomb and subsequent unrest, she said it caused disruption across the city to both businesses and local residents.  Cllr Duffy added that most people in the city want ‘peace and prosperity’ for their children and don’t want ‘mindless’ violence. “It is not what people voted for overwhelmingly in the Good Friday Agreement,” she said. Her views were echoed by SDLP Councillor Martin Reilly who said the car bomb which was detonated had the potential to kill people, caused disruption to those going about their daily lives and had a ‘big impact’ on workers whose cars were hijacked – resulting in services being withdrawn from certain areas for a period of time. It is important for people to deliver the message, he said, that these actions are ‘not in my name’ and he therefore called on the community to attend the NIPSA organised peace rally at the Peace Garden on Foyle Street tomorrow (January 25) at 1pm. Independent Cllr Sean Carr then proposed an amendment to Cllr Duffy’s motion stating that ‘council unambiguously says violence is wrong whether that be carried out by the state or those opposed to the state, past or present, and that must be condemned.’ His amendment was seconded by Cllr Reilly. When put to a vote the amended motion was carried after nineteen councillors voted in favour and eighteen voted against.  Current Mayor, John Boyle of the SDLP, had the casting vote for the first time in his tenure. Sinn Féin and Independent councillors voted against, while the unionist parties, SDLP and Sean Carr supported it. Cllr Duffy expressed disappointment at what she believed to be a missed opportunity to send a message to those responsible for recent violence and said the circumstances now are ‘very different to the past…there’s no comparison.’ And she added the weekend attack and subsequent hijackings are ‘opposed by the vast majority of citizens.’ PSNI Resources A separate motion was put forward by UUP Alderman Derek Hussey which proposed giving increased resources to the PSNI to deal with current levels of criminality and to address the present financial deficit.  It was seconded by his party colleague, Alderman Mary Hamilton. Gary Donnelly, Independent Councillor for The Moor, asked for a legal opinion, saying the earlier motion had been passed which condemned ‘all violence’ yet Cllr Hussey’s proposal was in support ‘of one of the groups responsible for violence’.  This week, he said, the PSNI has carried out a ‘large number of violent and destructive house raids’ which have also affected ‘vulnerable people’ and those arrested who had ‘no evidence put to them’. After further discussion Cllr Hussey’s motion was carried after all councillors voted in favour apart from all Independent councillors who voted against or abstained.
ADVERTISEMENT - CONTINUE READING BELOW