Derry 4: Compensation award is the ‘final vindication’ of murder accusation 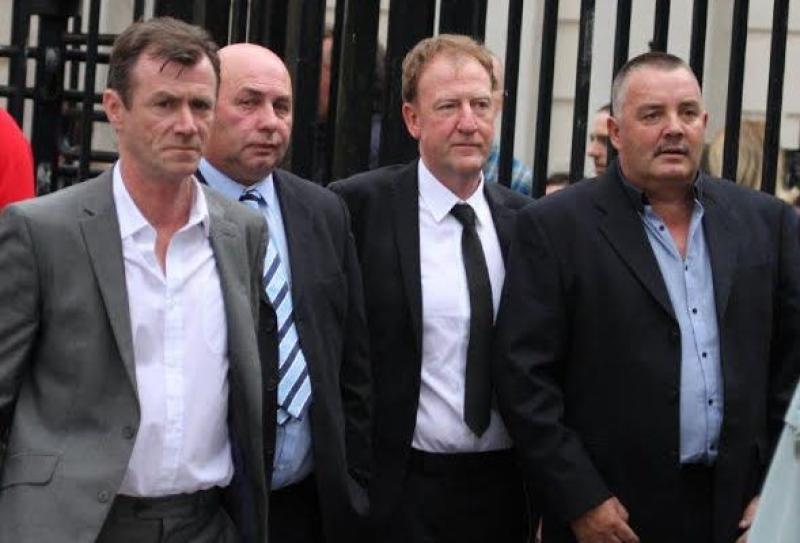 Four men wrongfully accused of the murder of a British soldier in Derry almost exactly 40 years ago have received an out of court settlement from the PSNI in respect of their case. The Creggan men-Stephen Crumlish, Gerry McGowan, Gerry Kelly and Michael Toner became known as the ‘Derry 4’. All of the men were teenagers when they were accused of being involved in an IRA sniper attack that resulted in the murder of Lt Stephen Andrew Kirby at Abercorn Road in Derry on Valentine’s Day, 1979. After their arrests the men were subjected to three days of physical and verbal mistreatment while under questioning at Strand Road RUC Station and as a result signed false confessions in relation to the shooting. At a press conference held this morning at the Rath Mor centre in Creggan, Patricia Coyle a lawyer for the men said: “On the sole basis of the false confession obtained in oppressive circumstances they were charged to court and remanded in custody to Crumlin Road jail. “They remained in custody six weeks until granted bail by the High Court in Belfast. They were then subjected to onerous bail conditions for over a year including reporting to police, on a daily basis, and curfews. “The trial commenced at Belfast Crown Court on October 13, 1980. After two days of the trial received advice that in light of the Diplock Court system with judges sitting alone, their defence was futile. “All four left Derry for the Republic of Ireland and a life in exile. For the next 20 years they lived their lives under the shadow of the most grave false allegation with active bench warrants from a court in Belfast hanging over their heads.” While the Derry 4 were finally acquitted of any involvement in the killing in 1998 by the Crown Court and in 2003 the Pat Finucane Centre (PFC) in Derry launched a series of complaints again the RUC over their involvement in the case. A subsequent investigation into the police handling of the case has uncovered a series of highly questionable methods employed by two RUC officers in particular. The PFC are still awaiting a final and conclusive report on the matter by the Police Ombudsman. Lawyer Patricia Coyle continued: “This settlement comes with no acceptance of liability on the part of the police. But, my clients refused to a confidentiality condition as part of this settlement. “While some questions remain unanswered the payment of a significant sum of compensation to each of these gentlemen by the Chief Constable is a final vindication and correction of the public record.” News of the financial settlement for the four Derry men came as news broke in the last few minutes that PSNI Chief Constable George Hamilton announced his retirement from the police force in June this year. CAPTION: Stephen Crumlish, Gerry McGowan, Gerry Kelly and Michael Toner became known as the ‘Derry 4’. FULL STORY IN THURSDAY'S DERRY NEWS
ADVERTISEMENT - CONTINUE READING BELOW