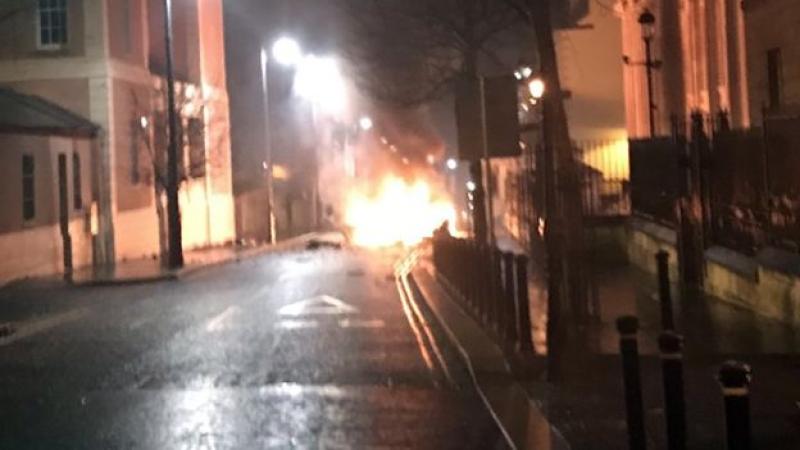 Local councillors have voted overwhelmingly in favour of a proposal which called on the NI Policing Board to provide additional resources for Derry police in wake of the recent bomb attack. The motion was put forward by UUP Alderman Derek Hussey which stated the ‘council are mindful of the need for increased resources to the PSNI to frustrate and eliminate the criminality currently being perpetrated on our citizens throughout the district and therefore call on the Chief Constable, Policing Board and Secretary of State to address the present deficit.’ It was seconded by his party colleague, Alderman Mary Hamilton. Cllr Hussey said what happened was ‘absolutely scandalous’ and an attack on ‘citizens and the economy of the area’.  It placed the police service under ‘tremendous pressure’ and removed officers from ‘other duties’, he added. He urged the council to call on the Chief Constable and others to address ‘the obvious deficit in resources’. Gary Donnelly, Independent Councillor for The Moor, asked for a legal opinion, saying an earlier motion had been passed which condemned ‘all violence’ yet Cllr Hussey’s proposal was in support ‘of one of the groups responsible for violence’.  This week, he said, the PSNI has carried out a ‘large number of violent and destructive house raids’ which have also affected ‘vulnerable people’ and those arrested who had ‘no evidence put to them’. Sinn Féin Councillor and former Mayor, Maoliosa McHugh, said it was a matter for the Policing and Community Safety Partnership, to raise these matters and ensure there is an acceptable level of policing in the community.  He and his party members could accept the motion, he explained, but said they were totally opposed to police violence towards members of the community as ‘that type of reaction by the state gave rise to violence in this country’. Cllr McHugh said he would agree with additional resources if required but added that there are ‘many areas’ which require extra funding at present. Alderman Drew Thompson, DUP, told the meeting he had met with the Chief Constable since the Bishop Street bomb and would ‘certainly support’ this motion. After further discussion Cllr Hussey’s motion was carried, thirty-three councillors voted in favour but all Independent councillors voted against or abstained.
ADVERTISEMENT - CONTINUE READING BELOW