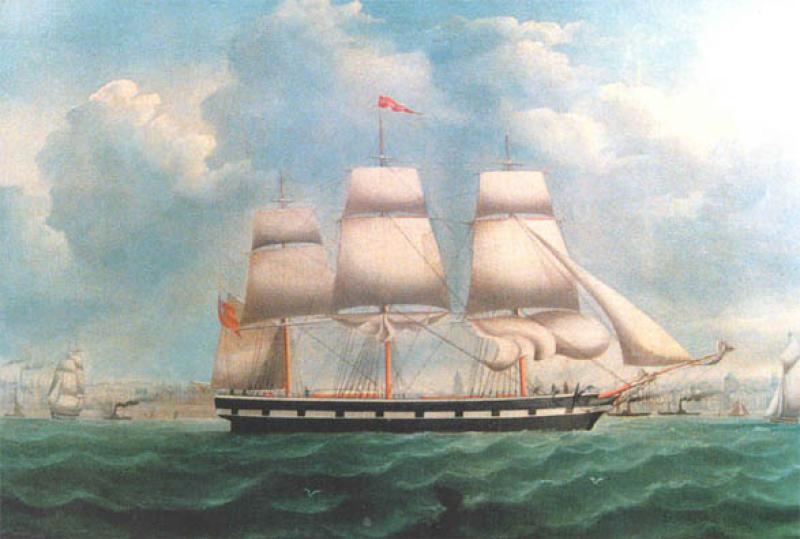 Amongst those buried in Derry City Cemetery are members of the McCorkell family who were amongst those who spearheaded the city’s long forgotten shipping industry.

Wm. McCorkell & Co Ltd operated the McCorkell Line from 1778 and carried passengers from Ireland, Scotland and England to the Americas.

However, the family’s arrival here was not one that was greeted with triumph but instead was shrouded in secrecy.

The McCorkell family arrived in Ireland in 1745 after the defeat of Bonnie Prince Charlie following the ill-fated Jacobite backed rebellion in that year. Three brothers named McCorquodale, who supported the prince were forced to flee and rowed in an open boat from the west coast of Scotland and landed on the coast of Antrim.

To cover their tracks the trio changed their name to McCorkell. One of the brothers, William, born in 1728, was the founder of the shipping company in 1778.

The family’s involvement in political upheaval was still however going on around 200 years later, when they had a role in secret talks between the British Government and the IRA during the early years of the Troubles.

Derry’s port was one of the main sites of emigration to Canada and America. To begin with the McCorkell company acted as agents for ships sailing to and from the city.

But, from 1800 William and Archibald McCorkell, sons of the shipping line’s founder started to expand through buying American owned vessels. They traded from Canada to the West Indies. The ‘Marcus Hill’ was the first ship bought in 1815 and it continued to cross the Atlantic until 1827.

In 1824 the ship ‘President’ was added to the growing fleet and other ships were chartered from other companies to cope with the growing demand for passage to America.  The purchase of the ‘Caroline’ in 1834, the ‘Erin’ in 1836 and the Canadian built ‘Mohongo’ in 1851 all added to growth and reliability of the McCorkell line.

In her 20 years as part of the McCorkell fleet the ‘Mohongo’ completed over 100 Atlantic crossings without any serious incidents.

From the mid 1800s McCorkell’s ships were familiar in all ports ferrying passengers to Quebec, Philadelphia, New York and New Orleans.

Notably the McCorkell Line carried many emigrants who were fleeing the Great Irish Famine, 1845–50.

By 1860 the speed at which people could be carried across the Western Ocean became a factor in competing for passengers. Never a firm to rest on its laurels, Bartholomew McCorkell ordered a new ship to be built in Canada.

The ‘Minnehaha’ cost a huge $72,000, was able to cross the Atlantic in all weathers and during the winter months. Before this all emigrants crossed the seas in the spring and summer months. The ship became and remains even now the most famous of the McCorkell’s fleet and became known as the ‘Green Yacht of Derry’.

The ‘Minnehaha’ was one for the few ships to trade in New York to the Union side during the American Civil War carrying passengers as well as much needed supplies.

After the war Philadelphia also became a regular port of call and records at that port show that 5,164 passengers were carried whose passage had been paid by relations in America to the McCorkell agent there.

From 1873, steam liners began to outstrip the famous sailing ships. But, the McCorkell Line continued to carry passengers until 1897, but their main concentration switched to cargo.

The ‘Minnehaha’ was converted to a barque in 1880. The removal of one its mainsails reduced the number of crew required and increased the capacity to carry more cargo. Overall, the ship served 35 years with the company until she was sold in 1895.

Other famed vessels of the company included the ‘Village Belle’ with 25 years service, the ‘Oweenee’, the ‘Osseo’ and the ‘Hiawatha’.

The ‘Hiawatha’ was the last vessel owned by the McCorkell Line when it was sold in 1897 and was later sunk by a German warship during WWI in 1916.

The demise of the shipping company however was not the end of the McCorkell family’s involvement with Derry.

Dudley McCorkell was Mayor of Derry between 1930-33 and represented the city at the Ottawa Conference on Trade in his last year as the city’s first citizen.

Whilst the McCorkell shipping line had gone, Wm McCorkell & Ltd still existed as a freight line. The knowledge of Derry’s maritime past and the trade potential for the city saw the family still at the heart of all things related to the city’s port.

Dudley McCorkell and his nephew Michael who succeeded him at the head of the company also served as Harbour Board Commissioners. Michael’s son John was also the driving force behind for the relocation of Derry port to Lisahally in 1990.

Ballyarnett House on Derry’s Beragh Hill Road was built by the McCorkell family in 1845 and was solely occupied them until recent years.

Set in eight acres of land it boasts 11 bedrooms, a grass tennis court, a wine cellar, a billards room and a large fish pond.

In 1972 a massive upsurge in violence in Northern Ireland saw Aileen McCorkell, who died at Christmas 2010, agree to host secret talks between the IRA and the British Government.

After her death it was reported that Lady McCorkell’s “clear sighted impartiality and pragmatism” led to agree to host the negotiations.

It was also said that beyond a courteous nod and the provision of tea and cake she played no part in the talks and kept away in a quiet part of the property.

The truce agreed between the IRA and the British delegation was however short-lived. It’s said that members of the North Derry Pony Club who held their annual camp on the McCorkell’s lands at Ballyarnett woke one morning to find British soldiers had arrived secretly during the night were shaving out of their horses’ feeding buckets.

Lady Aileen McCorkell founded the Derry City Red Cross Group in 1962 and in 1972 was awarded the Red Cross Badge of Honour for Distinguished Service. Her experiences in the Red Cross during the Troubles were recorded in a short memoir called a “Red Cross in My Pocket’ in 1992.

Aileen McCorkell’s husband Michael was appointed Lord Lieutenant of Londonderry in 1975 and was awarded a knighthood in 1994. He died in 2006.