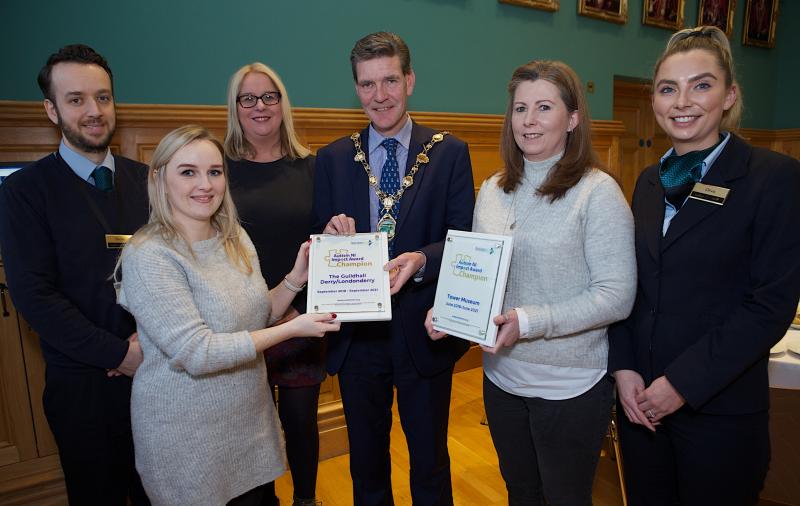 Autism NI have awarded the Guildhall & Tower Museum the prestigious ‘Autism Impact Award’ in recognition of the venues going ‘above and beyond’ to create accessible and ‘autism-friendly’ environments.

They are two out of 21 cultural venues in the Derry City and Strabane District Council area to achieve the award with support from the Public Health Agency.

Council is also taking a pro-active approach towards encouraging arts & cultural venues across the City and District to do what they can to make their premises more autism-friendly.

Both the Guildhall and Tower Museum have been commended for their commitment to ensure that services are open to all. Staff and volunteers at both venues also recently completed the full day workshop on fundamentals of autism and as a result were acknowledged as ‘Autism Champions’. They have also been presented with a plague for their achievements in becoming ‘autism-friendly’ venues.

“The work being led and implemented by Council through the Access and Inclusion Project is encouraging arts and cultural venues across the City and District to continuously work towards becoming more autism-friendly.

“It is a real testament from all the team who understand the importance and impact on achieving such an award and I would like to warmly congratulate the Guildhall and Tower Museum for doing so.”

Christine English, Autism NI’s Development Manager said: “We are delighted to work in partnership with Derry City and Strabane District Council as they work to become an Autism-Friendly Council.

“Autism NI have been working with the Council’s Culture Section for over a year as part of the ‘Access and Inclusion Project’ to provide training and support to a number of venues through our Impact Award Scheme, which awards and celebrates organisations who are committed to Autism Accessibility.

“We congratulate the Guildhall and Tower Museum on being two of the first venues in the area to achieve this award and look forward to continuing this great partnership to increase accessibility in other venues across the Council.”