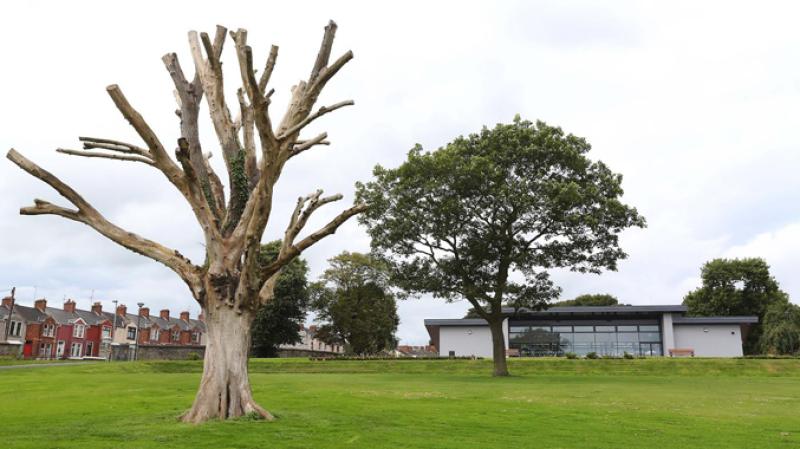 One of the Derry's best known and most photographed trees is to be removed in the spring for health and safety reasons as part of Derry City and Strabane District Council’s Tree Management Programme.   The old Elm tree in Brooke Park was killed by Dutch Elm Disease over 10 years ago, caused by a fungus which blocks the water transport system in a tree causing the braches to wilt and die. It is spread by elm bark beetles that burrow their way into the dying tree and lay eggs.   Rather than felling it at that time, Council has actively monitored the condition of the dead tree and carried out successive crown reductions.    The tree was the centre piece of ‘Dead On’ - a Void Gallery sound artwork by Locky Morris in 2013 and stands before the stunning backdrop of St Eugene’s Cathedral and the wider cityscape.   Council’s Tree and Woodland Officer Brendan Garthwaite is responsible for the management of all Council owned trees and woodlands.   He explained that the decision was made to remove the tree as it has now reached the end of its natural life, even as a standing structure.   “We have been closely monitoring the tree’s condition for some time and unfortunately its condition has continued to deteriorate with several major cracks beginning to appear in the dead branches of the crown.   “We manage the trees in Brooke Park to ensure they are kept in good condition and to sustain their presence.   “We appreciate the affection that exists for the tree locally but we have had to take the decision to act and remove it in the interests of public safety.”
ADVERTISEMENT - CONTINUE READING BELOW