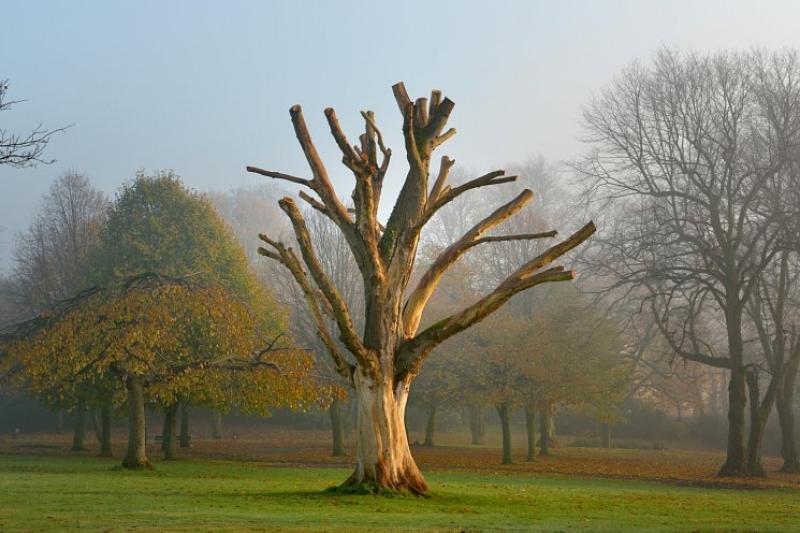 Plans by Derry City and Strabane District Council to remove an "iconic" tree from Brooke Park has been greeted by calls for an urgent rethink by people in the Rosemount district.

Council has announced that the tree is to be removed from the park this spring for health and safety reasons as part of their Tree Management Programme.

The old Elm tree fell prey to Dutch Elm Disease over a decade ago. The disease blocks the water transport system in trees causing the branches to wilt and die. It is caused by elm bark beetles that burrow into dying trees and lay eggs.

The tree is one of the most photographed in the city set as it is against the backdrop of St Eugene's Cathedral and the wider cityscape.

Tree and Woodland Officer at the Council Brendan Garthwaite said the decision was made to remove the three because it has reached the end of its natural life.

"We have been closely monitoring the tree's condition for some time and unfortunately its condition has continued to deteriorate with several major cracks beginning to appear in the dead branches of the crown," he said.

During 2013's City of Culture the tree was the centerpiece of a Void Gallery sound artwork by the renowned Derry artist Locky Morris called 'Dead On'.

One lifelong Rosemount resident says there must be something that could be done to preserve at least part of the tree.

Dalton Kehoe said: "Ten years ago when we were taking part in the consultation on the renewal of Brooke Park we took situations like this into consideration.

"There must be a way to use this tree as an artistic installation. I understand that it is a health and safety issue, but this tree is off the main walkway and can't present that much of a risk.

"It's an iconic part of the landscape of the park and the plans to cut it down is causing widespread anger in the area. Surely it can be made safe and turned into a sculpture. There should have been a wide consultation with people in the area and those who use the park before this decision was made."

Darren O'Reilly, Independent Councillor for the district told the Derry News that he has already consulted with the relevant Council officers to see what can be done to prevent the tree being totally removed.

He told the Derry News: "I have sought advice from council officers with a view to keeping the tree and doing something with it instead of totally destroying it. It's a significant  part of the landscape of Brooke Park and a focal point for people who visit there."

In 2017 a dead beech tree at Belmont in the city was saved from complete destruction after a Northern Ireland Housing Executive led project saw a sculptor and wood carver created a series of Celtic images on it.

However, Brendan Garthwaite continued: "We manage the trees in Brooke Park to ensure they are kept in good condition and to sustain their presence.

"We appreciate the affection that exists for the tree locally but we have had to take the decision to act and remove it in the interests of public safety."