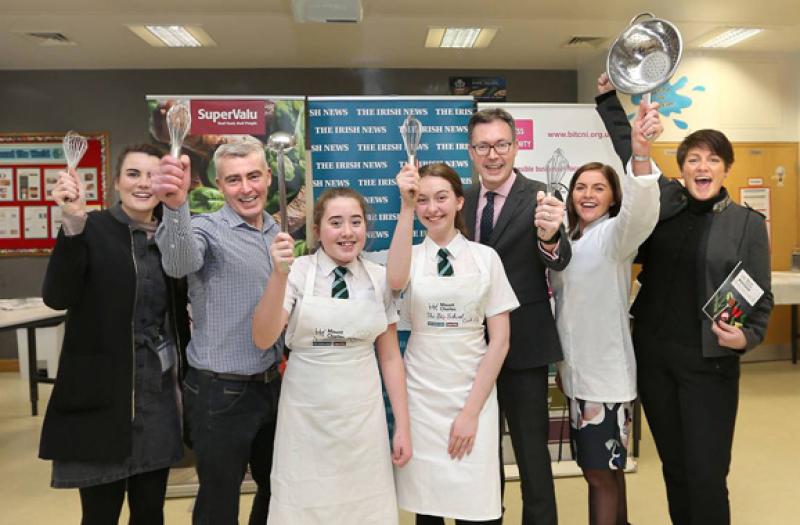 Pupils from a Derry school have qualified for a major cooking competition. After an outstanding display of talent, creativity, technical skills and local knowledge, St Cecilia’s College Year 10 pupils Roise McLery and Dearbhail O’Donnell have won the County Derr regional final of the Mount Charles Big School Cook Off, earning them a place in the grand final of the country-wide cookery competition taking place next month. The St Cecilia’s College team’s dish of Kedegree Fish Pie served with Braised Leeks and Peas saw them take the top spot. They will join seven other teams from across Northern Ireland and Donegal to take part in the final stage of the 2019 Mount Charles Big School Cook Off in association with the Irish News and SuperValu. Special guest Imelda McCarron, a contestant from the BBC’s Great British Bake Off, will join the judging panel for the grand final. Each of the teams taking part in the final won a regional heat where they competed against other teams from their county, with a total of 37 schools taking part in this year’s competition and two heats taking place in County Antrim due to the sheer volume of entries. Nearly 200 dishes were entered into the first stage of the contest, with only the very best making it as far as the regional heats; and the teams that were successful at those heats are now preparing in earnest for the grand final at Belfast Met’s Titanic Quarter campus in March. May McGuire, teacher at St Cecilia’s College, said: “I’m just delighted for the girls. They’ve been practicing both in school and at home and produced a really first class dish on the day, which was presented beautifully. “The competition has been great for developing their sense of responsibility and confidence, as well as their ability to work under extreme pressure. It’s great for their self esteem, and for showing other pupils what can be achieved when you put your mind to it,” she added. Caitriona Lennox, Business Development and Retention Manager at Mount Charles, Ireland’s largest locally owned foodservice company, and Big School Cook Off Ambassador said: “First of all, a huge congratulations to all of the schools and the team from St Cecilia’s College who made it to the final stage of the competition. “Our taste buds were well and truly tickled at the heats, the talent and creativity these young chefs displayed was, quite simply, exceptional. “We would love to see more young people considering a culinary career, so the Big School Cook off is our way to encourage and inspire them, helping them to grow a valuable life skill that might just pave the way to success in the future,” she added. Food market retailer SuperValu is the proud sponsor of the Big School Cook Off. Commenting on the announcement of the finalists, Brendan Gallen, Head of Marketing for SuperValu said:   “We were astounded by the level of talent and creativity on display at each of the regional heats and we’d like to congratulate everyone that has made it to the grand final.   “SuperValu prides itself on providing a great selection of fresh, local produce to communities right across Northern Ireland, inspiring people to get back into the kitchen and to make healthier choices. It was really encouraging to see this next generation of foodies in action; their passion and enthusiasm for food, great quality ingredients and cooking was truly inspiring." Photo shows Shannon McGowan, Business in the Community, Declan Corry, owner of SuperValu Shantallow, Northside in Derry, St Cecilia’s College pupils Dearbhail O’Donnell and Roise McLery, John Brolly, Ann Rodgers, Head of Catering for Mount Charles at Ulster University Coleraine and Caitriona Lennox, Business Development and Retention Manager from Mount Charles.
ADVERTISEMENT - CONTINUE READING BELOW