OBITUARY: Renowned singer William Loughlin to be laid to rest this Sunday 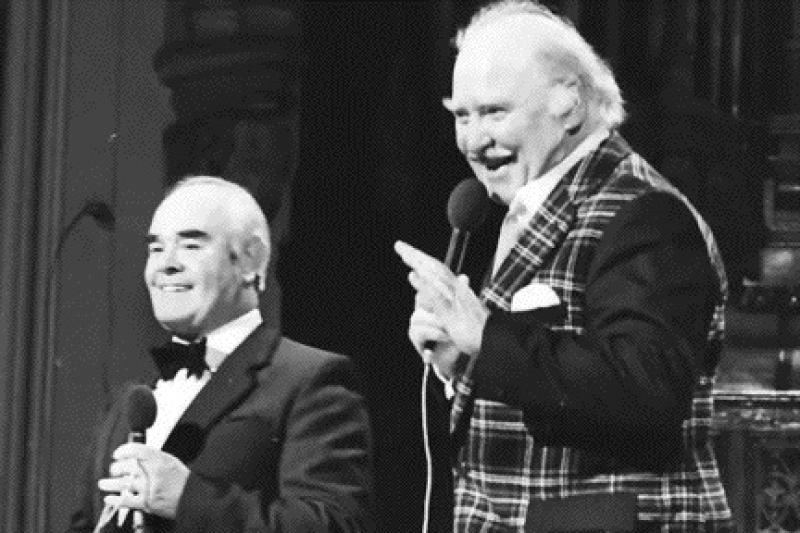 William Loughlin, one of the city’s most renowned singers will be laid to rest this Sunday having sadly passed away on February 3.

Mr Loughlin, who was 92, was affectionately known as the ‘Singing Laundryman’, had an exceptional bass voice and performed to great acclaim across the world. He first appeared in concert in 1945 and made his debut on the BBC two years later in 1947.

William Loughlin's local performances included an appearance at the city's Guildhall with legendary tenor Josef Locke. For many years Mr Loughlin’s singing was also a regular feature of the annual Remembrance Sunday services at The Diamond.

For decades William performed across Derry and far beyond as part of a cabaret troop hosted by the late BBC Radio Foyle presenter Don O’Doherty and that included such talents like that of renowned singer Maureen Hegarty.

Paying tribute to her friend and co-performer, Maureen told the Derry News: "We played an awful lot of concerts all over the North at the height of the Troubles. We travelled together through some very hairy times.

"But, Willie was totally dependable. If he said he'd be there at 9 o'clock, he was there at 9 o'clock on the dot. We appeared together in some big concerts for the BBC including one called 'Music in the Air' and also for the tribute to James MacCafferty.

"Joe Locke often remarked how much he liked Willie, probably because he wasn't any competition to him. Joe was a tenor and Willie had a very rich bass voice.

"Willie was also a great storyteller and he loved jokes and shared so many of them. We were also part of the many Derry-Boston concert trips. He was always dressed immaculately and turned out like a model."

Mr Loughlin was also a dedicated participant at the Sunday evening Summer Recitals at Ballywillan Presbyterian Church in Portrush. And, in 1990 he travelled to Germany with the Ballyclare Male Choir with the venture proving successful that he was invited back the following year.

A lifelong member of the congregation at First Derry Presbyterian, William Loughlin gave over seven decades service to the church choir.

In 2017, approaching his 90th birthday and recovering from a fall he declared: “I’ve been in that choir for 75 years and I have no intention of retiring.

“I’ve sung in many different venues around the world, and the Ulster Hall in Belfast, with its unique acoustics, is special to me.

“However, there is no place to match First Derry and it’s choirbox.”

However, William’s personal life was not without its share of tragedy. In 1993 on a visit to Canada, his wife Ruby was killed in a car crash. William and three other passengers in the car survived.

Mr Loughlin later said: “I managed to carry on after that tragedy. I think of Ruby every time I sing the 121st Psalm, ‘I To The Hills Will Lift My Eyes’ which she and I loved.”

Maureen Hegarty continued: "When Ruby was killed he was devastated. As a couple they were together for a long time. When Ruby died I went to the house to see Willie. I didn't want to make a grand gesture so I just brought a single rose. He told me later that he placed the flower in the coffin with her and that meant an awful lot to me.

"Willie kept on singing well into his 80s at a high standard and they aren't many that kept going like that with dedication. It was very admirable. His passing is very sad, it's part of an era that's now gone."

William Loughlin's funeral cortege will leave his home at Church Brae this Sunday at 1.15pm for a 2pm service at First Derry Presbyterian Church. The service will be followed by a private committal in Altnagelvin Cemetery. The family home is strictly private but donations in lieu of flowers can be made to Ward 42 or Ward 44, Altnagelvin Hospital care of the Cash Office.

A funeral notice for William Loughlin noted that he was the: "Dearly beloved husband of the late Ruby and a loving father of Kenneth, Allen, Paul and the late Anne, father-in-law of Sylvia, Johanna, Bernadette and Raymond and a devoted grandfather and great grandfather to Janeen, Shona, Nia, Ian, Rebecca, Zoe, William, Alastair and David."