Derry City Cemetery Series: The city’s first nationalist mayor and the turbulent events of 1920 in Derry 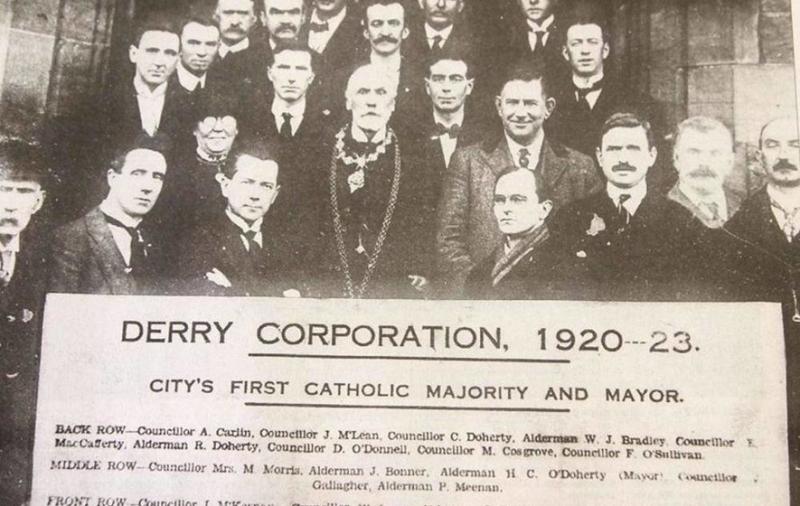 After the 1918 General Election the political landscape in Ireland changed dramatically.

The landslide victory for Sinn Fein set in motion a change of events that would have severe consequences on the island as a whole.

In Derry for example, it was the first time since the Siege of 1688-89 that the Protestant and unionist ascendancy lost control of the city's governance.

By 1920, a nationalist majority emerged on the city’s Corporation, and Hugh Camillus O'Doherty (1856-1924) was elected as the first nationalist and first Catholic Mayor of Derry, a post which carried with it membership of the Senate of Northern Ireland established by the Anglo-Irish Treaty of the same year that partitioned the island.

He was the first Catholic to hold the position since the time of James II when Cormac O’Neill briefly occupied the position.

Within nationalism O’Doherty was viewed as a neutral candidate, acceptable to both the Nationalist Party grouping and to the Sinn Féin bloc.

Several previous attempts had been made to elect a nationalist mayor but were repeatedly blocked by unionists. However, due to the implementation of the Local Government Act, the balance of power had shifted on Derry Corporation and unionists could no longer block the appointment of a nationalist.

The motion was carried by 20 votes to 19 and Alderman O’Doherty was declared mayor.

He ordered that the Union Jack should not be flown from the Guildhall and campaigned for Derry to be included in the newly established  Irish Free State.

The News Letter reported that there were no nominations for the position of High Sheriff of the city, the paper’s correspondent said.

“This being the first time no nominations were made by the corporation for the honour,” as the unionist members of the chamber had not put forward a nominee “knowing that the proposition would be defeated by the nationalist majority”.

“Bonfires were lit in nationalist areas of Londonderry following news of the election of Alderman Doherty as mayor.

“A band followed by huge throngs started marching through the city and in consequence some 150 troops with fixed bayonets were called out. Strong cordons were drawn across Ferryquay Street, Carlisle Road and at Ferryquay Gate – ‘well known danger points’.

In 1922, O'Doherty called a conference of all nationalists in Northern Ireland, in a first attempt to develop a common platform.

Born in Buncrana, O'Doherty raised his family and worked as a solicitor in Derry. A supporter of Charles Stewart Parnell, he was a founder member of the Irish National League. Following Parnell's death, O'Doherty withdrew from politics until 1918, when he was elected to Derry Corporation as a Nationalist Party councillor. Later in 1918, his daughter drowned on the RMS Leinster.

When on January 21, 1919 the First Dail sat in Dublin following the landslide victory for Sinn Fein in the General Election of the previous December, the die was cast for the resumption of hostilities between republicans and Britain.

The ensuing bloody and bitter Irish War of Independence of course led to the partition of the island, the creation of Northern Ireland and decades of party political rancour in the south between the factions that were for and against the Anglo-Irish Treaty.

Whilst the fighting was largely confined to the south, it also spread north. In the summer of 1920 in Derry this led not just to fierce clashes between the IRA and the British Army but also to dreadful sectarian fighting that pitted the city’s Catholic and Protestant communities against each.

Tension had been heightened in Derry when Hugh C O'Doherty said it was unlikely he'd attend any function where there was a toast to the British monarchy.

He did, however, seek to reassure unionists that he wanted to create a neutral environment in the Guildhall.

Upon his election he said: “Today a long and painful chapter in the history of the city is closed and a new one is opened. I trust when it comes to be written it will show a spirit of tolerance and forbearance amongst all creeds and classes.

“So far as in our power lies my Nationalist colleagues and I mean to conduct the business of this Corporation without giving offence, and we will expect like consideration.”

His bold proposal on the flags was also designed to politically neutralise the Corporation, which had been regarded with wariness by many nationalists as a result of gerrymandering and discriminations.

“The flying of insulting flags from this building must be discontinued, and I now give in the name of the majority of this chamber instructions to that effect. The building is the common property of all citizens, and my view is that until the government of this country is settled in accordance with the will of the Irish people no flag should be flown from it. “I trust that my wishes in this matter will be respected, as least as long as I preside here,” he continued.

During his three tenure as Mayor from1920-23 there was no flag flown over the Guildhall.

Trouble duly broke out in Derry during April, 1920 when republican prisoners were brought from all over Ireland to Derry jail.

Loyalists gathered in Bishop Street to jeer the IRA men as they were paraded into the prison. As a result scuffles broke out between them and nationalists in the area.

And, as the trouble escalated nationalists attacked the Royal Irish Constabulary (RIC) station on Lecky Road with stones. The RIC responded with gunfire wounding six people and the situation got even worse when the UVF became involved and fired from the City Walls into the Bogside.

Added to this the Dorset Regiment of the British Army fired into nationalists crowds which included women and children.

On May 15, nationalists attacked a British Army patrol leading to serious rioting. During the street clashes the UVF attacked Bridge Street and came under returning fire from the IRA. The four hour long gun battle resulted in the death of a RIC Special Branch Dectective-Denis Moroney.

The UVF also took over Carlisle Bridge and asked motorists and pedestrians their religion. Anyone who said they were Catholic was assaulted. Also, Catholics who attempted to cross the river in boats were fired upon.

In June, the UVF opened fire on Long Tower church. As the IRA responded, the Dorset Regiment strafed the Bogside with machine gun fire killing ten Catholics. A Protestant man, James Dobbin was also killed. Outmanned and outgunned, the IRA in Derry called for reinforcements from Donegal.

The reinforcements, led by Peadar O'Donnell began to regain UVF controlled areas, most notably St Columb's College and an estimated 20 loyalist fighters were killed in the process.

As things were about to descend into utter chaos, an extra 1,500 British troops arrived in Derry bringing a halt to the sectarian element of the fighting. But, by the end of June, 1920 it was estimated that 40 people had died during the clashes.

Hugh C O’Doherty died on March 7, 1924 and was laid to rest in Derry City Cemetery.

CAPTION: Derry's first nationalist Corporation. Hugh C O'Doherty is featured in the middle of the picture.
ADVERTISEMENT - CONTINUE READING BELOW