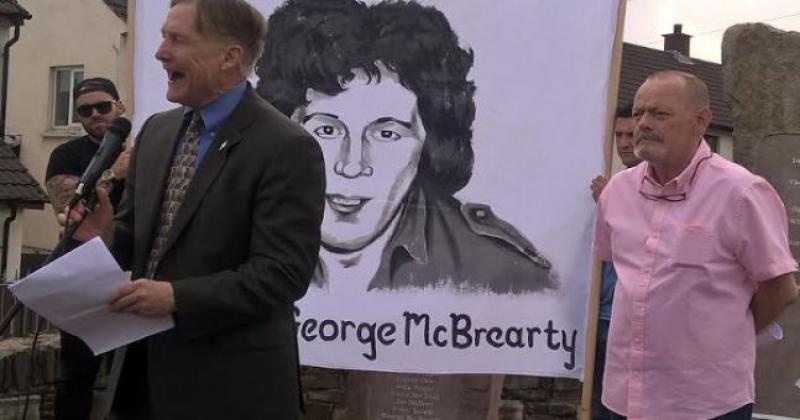 A large delegation of American Ancient Order of Hibernian (A.O.H) members will pay a two-day fact-finding visit to Derry next week, the Derry News can reveal.

The group will also visit Belfast and Tyrone before receiving a briefing from Irish Government officials in Dublin. The visit forms part of the work of a committee within the U.S. A.O.H called ‘Freedom for All Ireland’.

That committee is headed up by New York based lawyer Martin Galvin who was publicity director for NORAID-a U.S. based organisation accused of supplying funds to the Provisional IRA in the 1980s.

Mr Galvin was banned from entering Northern Ireland in the 80s because of a speech he gave that appeared to endorse terrorism.

He defied the ban in 1984 and walked into Derry over the border with Donegal at Bridgend. He defied the exclusion order again in 1985 and 1989 when he was arrested and deported back to the USA by the British authorities.

Martin Galvin told the Derry News: “The American A.O.H is committed to helping achieve freedom for all Ireland. Members of the organisation in the United States are inspired by those in Derry and across the north who will never give up on getting their right to freedom from British rule and injustice.

“We will be in Derry to get a first hand perspective from a broad range of political leaders, civil rights leaders, justice groups, prominent republicans and cultural figures so we can bring that knowledge back to America and become more effective advocates of freedom for all Ireland.”

A wide-ranging itinerary is planned for the Derry portion of the visit. It begins next Wednesday (February 13) when the A.O.H delegation will receive a talk from Kevin Hasson of the Bogside Artists on the importance of political murals and art in Derry at the George McBrearty mural in Creggan.

Danny McBrearty, brother of George McBrearty added that all political parties in the city are welcome to attend the event and extended an invitation from himself and his mother Bridie.

Other locations on the fact-finding mission will be a visit to the mural for Mickey Devine, the last of ten republicans to die in hunger strike in 1981. Tony O’Hara, the brother of INLA hunger striker Patsy O’Hara, will speak of his recollections of his death. And, other former republican prisoners will speak about the legacy of the 1981 prison protest.

On Wednesday night at the Maldron Hotel, journalist Eamonn McCann will give a presentation to the A.O.H delegation about 50 years on from the Civil Rights protests that he played a central role in and the continuing relevance of his recently republished book ‘War and an Irish Town’.

Thursday morning will see the American contingent receive a tour of the Guildhall followed by a reception with Mayor John Boyle. Councillor Boyle has issued an invitation to all political groups on the council to be represented at a question and answer session. Topics for discussion will include Brexit, the differences in strategies for Irish Unification and what local representatives view as the role for the A.O.H as the United States oldest and largest Irish-American organisation.

Later on Thursday the U.S. contingent will visit the Museum of Free Derry and receive a talk from John Kelly on the continuing legacy of Bloody Sunday as well as a talk from Paul O’Connor from the Pat Finucane Centre on today’s legacy and justice issues.