BREXIT: Nationalist leaders voice anger after meeting with Theresa May 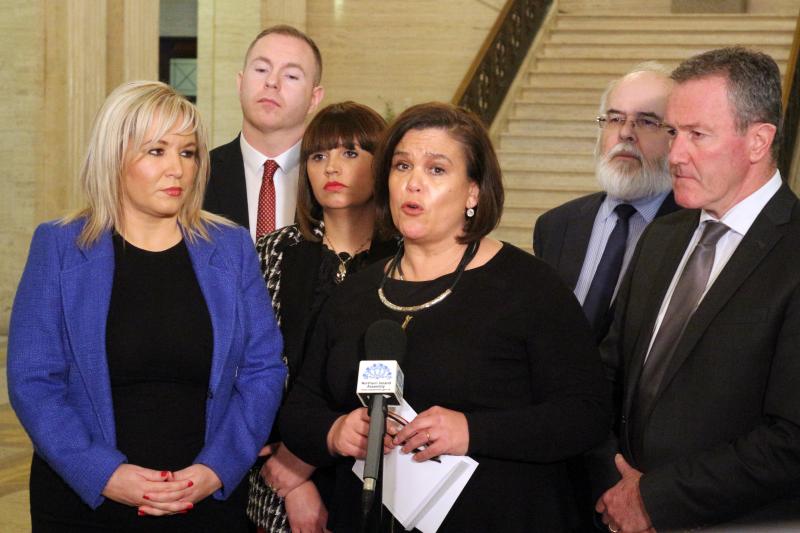 Nationalist and republican representatives from Derry have voiced their anger after today’s meetings with Prime Minister Theresa May at Stormont on the continuing saga of the Brexit backstop. MP for Foyle, Elisha McCallion said afterwards that the days of Britain dictating to the people of Ireland are over and the British Prime Minister needed to accept that reality if she is to avoid a no deal Brexit crash. Mrs McCallion said: “Sinn Féin told Theresa May that we will not tolerate anything that undermines the Good Friday Agreement and that is precisely what a hard border in Ireland would do. “The backstop is an insurance policy to prevent a hard border. It is supported by the majority of citizens, businesses and other key sectors of our society and people. “Theresa May’s attempt to row back on it is an act of gross bad faith and an act of hostility against Irish interests. “The days of Britain dictating to the people of Ireland are over and Theresa May needs to accept that reality if she is to avoid a no deal Brexit crash. “She continues to appease DUP opposition to the Backstop but an agreement will never be found in pandering to the DUP. “The government here collapsed because of the DUP and they have now brought their dysfunctionality and chaos into the heart of the Brexit process. “We are only six weeks away from a No Deal crash out. Of course, the ultimate guarantee against that scenario is the provision within the Good Friday Agreement for a referendum on Irish Unity.” Meanwhile, SDLP Leader Colum Eastwood MLA said that today’s meeting with Theresa May did not fill him with confidence about her ability to broker a deal that includes the Backstop. Mr Eastwood impressed upon the British Prime Minister the importance of the Backstop, a stance she understands given her government arrived at that position in December 2017. He said: “These are extremely serious times. People can be in no doubt that we are heading towards a hard border if the Backstop is not banked prior to the 29 March; a retrograde step that will devastate our economy and our hard won peace. “We made it very clear to Theresa May that Northern Ireland must stay in the Single Market and the Customs Union if our interests are to be protected. Westminster must heed that. “In the critical weeks ahead, those of us mandated to protect people here must do exactly that. Soundbites from other parties about direct rule and border polls are not going to protect our people in the here and now.” CAPTION: Foyle MP Elisha McCallion pictured with a Sinn Fein delegation at Stormont after a meeting with Prime Minister Theresa May.
ADVERTISEMENT - CONTINUE READING BELOW