£8,000 of taxpayer's money spent removing graffiti from The Derry Walls 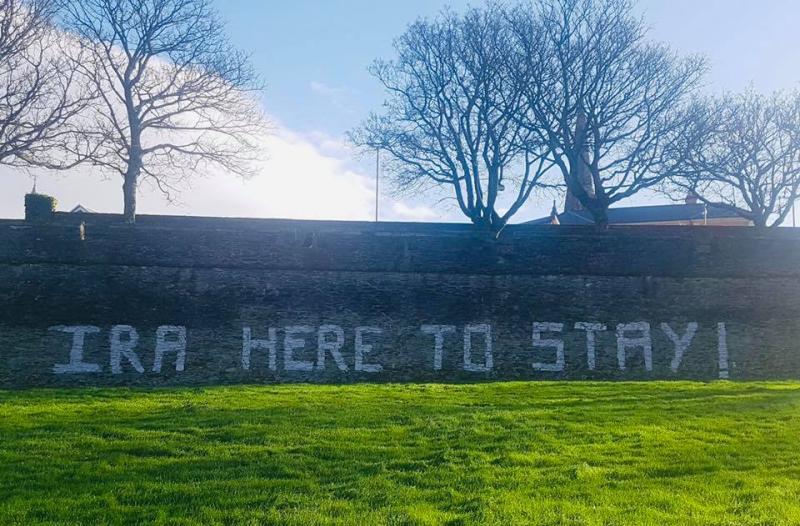 Over £8,000 of public money has been spent removing graffiti from The Derry Walls in the past three years, it has emerged. The most recent graffiti which appeared at a section of the Walls overlooking the Bogside was scrawled in large white writing and reads, “IRA HERE TO STAY!” - it will cost £1,800 to remove. The Department for Communities (DfC) said there have been eleven such incidents in the past three years. Next month marks the 400th anniversary of the completion of Derry’s iconic Walls which are one of the most recognised landmarks in all of Ireland.  The Walls have witnessed centuries of dramatic and tragic events, since the first stones of the fortifications were laid in 1619. DUP Alderman Graham Warke said the latest “Republican” graffiti went up on the anniversary of Bloody Sunday and is yet to be removed. He commented: “Once again we see the historic 400-year-old Derry Walls targeted with Republicans slogans.  The fact is, these walls are 400 years old, it’s the anniversary this year but anywhere else in the world, if they spray painted on the Leaning Tower of Pisa for example, there would an outcry about it. “It’s the biggest landmark in this city for tourists and them seeing that painted on it, what does that show - this doesn’t look good, it’s dreadful.  And people from both communities have told me it’s unacceptable. “You’re going to get graffiti at times, but on the iconic Derry Walls is another thing.  Only last year we had a councillor arrested for that and it cost nearly £3,000 to get it removed, it’s a disgrace to be honest. “I’ve reported it and have been given assurance that it will be removed soon.  It a total disgrace anybody would even think on doing this.” People commenting underneath Mr Warke’s initial Facebook post described it as “disgusting” and, another said, “I thought we had moved on from this”. A DfC spokesperson confirmed that it is responsible for the maintenance of The Derry Walls. He added: “The Department is aware of this incident of graffiti on the Western Perspective and is working with its partners locally to address it.  The Department is also working with Derry City and Strabane District Council to reinstate the lighting along the Western Perspective. “The cost to the public purse of removing this latest incident of graffiti on the walls will be around £1800.  There have been 11 such incidents in the last 3 years, which have cost £8,150 in total to remove.”
ADVERTISEMENT - CONTINUE READING BELOW