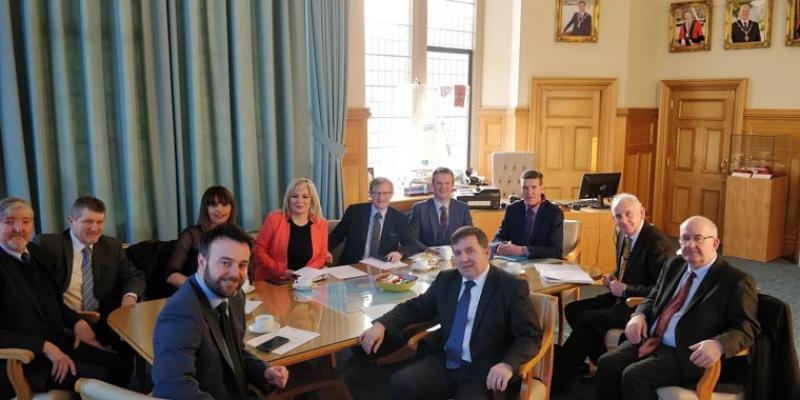 A meeting has taken place between political leaders and senior representatives from Ulster University to discuss the advancement of plans for a Medical School for the North West. Among the political representatives in attendance at the meeting, convened by John Boyle, Mayor of Derry City and Strabane District Council, were Lord Hay representing Arlene Foster (DUP); Michelle O’Neill (SF); Colum Eastwood (SDLP); Robin Swann, (UUP), and Colm Cavanagh representing Naomi Long (Alliance) and as well as MP Elisha McCallion and Alderman Derek Hussey. Professor Hugh McKenna and Provost of Magee, Dr Malachy O’Neill from Ulster University and Michael Gallagher, Senior Economist with Derry City and Strabane District Council attended. The party leaders acknowledged the positive benefit of securing a dedicated graduate entry medical school for the North West and for Northern Ireland as a whole. Mayor Cllr John Boyle described the meeting as very positive and productive and welcomed the joint party support for the development. He said he was confident that the consensus at today’s meeting would help expedite the project so that a decision can be made in the coming weeks. He said the recent Gardiner Report commissioned by the Department of Health acknowledged the shortage of doctors and noted that Northern Ireland was particularly dependent on graduates from Queens for its workforce. Mayor Boyle commented: “The development of the Medical School and the expansion of Magee are intrinsically linked and will contribute to the overall growth of the City Region alongside our City Deal proposals. A medical school will be an essential resource for the North West, with the potential to boost the region’s profile as a centre of clinical excellence and innovation, in tandem with the pioneering research work that is currently taking place at Altnagelvin. “All of the political parties represented at today’s meeting were unanimous in their agreement that the delivery of a Medical School is in the public interest and as such senior civil servants have the power to give the go-ahead for this project" He concluded: “In addition to the Gardiner Report supporting a case for the expansion of medical student numbers across Northern Ireland, we have political backing from all the main parties today. It is imperative now that the Department proceeds with urgency to get approval for this significant project in the coming weeks."
ADVERTISEMENT - CONTINUE READING BELOW