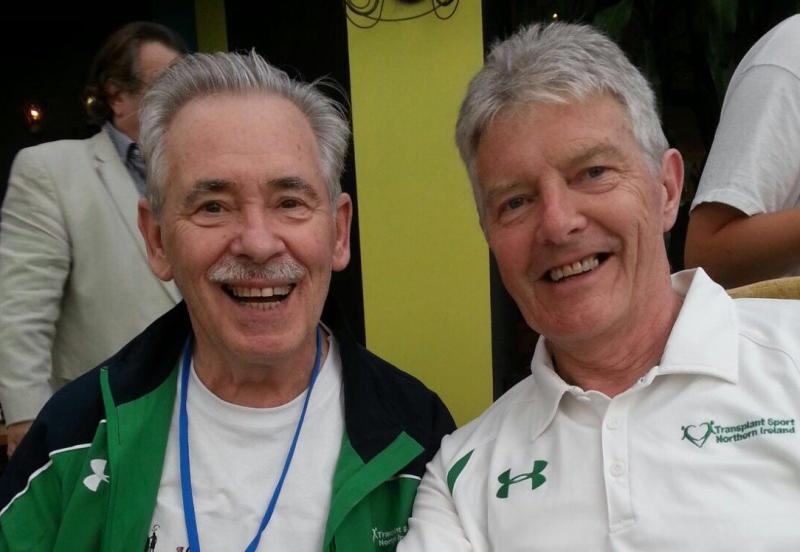 Multiple Paralympian gold medallist Jason Smyth has led tributes to his ‘inspirational’ grandfather who was buried at the weekend having sadly passed away last week.

Robert Smyth, from Eglinton, who was in his 80s passed away on Thursday, February 7 after a lengthy battle with cancer. He was laid to rest at Ballyoan Cemetery on Saturday afternoon following a service at The Church of Jesus Christ of Latter-Day Saints on the city’s Racecourse Road.

A remarkable man by any standards, Robert Smyth suffered with renal problems for 40 years until in 2011 he received a kidney from his daughter.

Despite his health issues, in 2017 at the age of 81 he emulated his famous grandson by competing in the 100 metres sprint at the British Transplant Games in Scotland.

Speaking to the Derry News Jason Smyth said: “It’s a very difficult time for everybody in the family. But, when I start to look back I will remember and celebrate the man that he was and celebrate his life.”

Robert Smyth was a passionate advocate of organ donation for many years and a strong supporter of the Renal Support Group based at Altnagelvin Hospital where he was regularly present at many events despite the onset of his more recent illness.

In advance of his kidney transplant in 2011 Mr Smyth paid a glowing tribute to his donor, daughter Lilona who was a near perfect match for the transplant procedure.

“I am unable to express in words just how proud I am of her. It’s not just a matter of gaining a kidney, it’s a matter of just how much love can exist within a family, and to me, that is even more significant than receiving a kidney and extension to my life. I love her so much and she knows this.”

Ever keen to promote organ donation Robert Smyth also said: “If people have the chance, they should go to a kidney isolation unit and see what life is like for those waiting for a transplant.”

Jason Smyth continued: “As a grandchild I will always remember what an incredible example he was of what a good person should be.

“He had integrity, honesty, he was reliable and trustworthy. If he knew something to be right and true then he was immovable.

“He lived his life by that example but was also always good for a laugh. For me, it will be about memories of a man that I would happily live my life in the image of his character.

“If I look at all the people I have met all over the world he was up there with them all in terms of the greatest respect.”

“He was an incredible support for all of his family and for me. Regardless of the situation, when he was needed he was there.”

“If I needed motivation or inspiration, or I just needed a hug, he was always there.”

Robert Smyth’s friend Eugene McClintock, who also received a kidney from his daughter Genevieve told the Derry News: “I met Robert through the renal support group and we became firm friends.

“We travelled to Scotland together as part of the first ever transplant team from Derry to take part in the British Transplant Games and we shared a room there. He was a very true friend and a lovely man to have known. He was a great example because he had a great attitude to life and had a great acceptance of his illnesses. It’s very sad that he has gone.”

“My uncle Bobby was probably the wisest man I have ever known. He lived his life with the deepest of faith and overcame the serious obstacles of ill health with a spirit very few get to witness.

“He touched everyone he met with his positive attitude and zest for life. It was a love for life that defied medical odds and in keeping true to his spirit, uncle Bobby waited until all his children were back home before he went home to God to enjoy the gift of eternal life. He will be sadly missed by us all.”

Robert Smyth is survived by wife Heather, sons David and Lloyd and daughter Lilona, his grandchildren and great grandchildren.

CAPTION: The late Robert Smyth, on the left, pictured with his friend Eugene McClintock.
ADVERTISEMENT - CONTINUE READING BELOW