Paramilitaries care about their own 'selfish agenda', say PSNI, after new figures highlight number of bombings and shootings in Derry 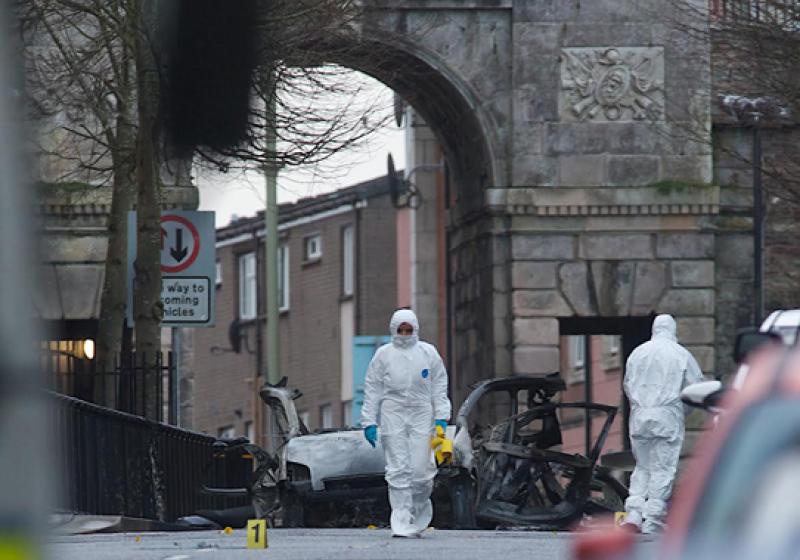 The PSNI has renewed its appeal for witnesses to the Bishop Street car bomb in Derry after newly published statistics revealed that paramilitary organisations remain a deadly threat in the city. The latest security statistics released by the PSNI include the courthouse bomb on Bishop Street which brought the total number of bombing incidents in the Derry and Strabane policing district to four in the current financial year. Over the same period, Derry City and Strabane, although experiencing the car bomb on January 19, saw the largest decrease in the number of bombing incidents year-on-year, falling from ten to four. There have been thirteen paramilitary-style shootings incidents, including three which have taken place in the past two weekends.  Last year there were nineteen in total but that included shootings in February and March. Over the past year fifty-one terrorism suspects have been arrested in the Derry are under the Section 41 Terrorism Act but just one person has been subsequently charged with an offence. In a statement to the Derry News the PSNI said there has been no escalation in the terrorism threat level despite the courthouse car bomb – it remains “severe” – meaning the police service categorises the possibility of further attacks as “highly likely”. Police said the investigation into the Bishop Street incident is “currently progressing” and the people responsible for the attack showed complete disregard for local people and businesses. Detective Chief Inspector Stuart Griffin from the PSNI’s Terrorism Investigation Unit commented: “We believe the explosion was carried out by the New IRA. We know that a number of young teenagers walked past the bomb right before it detonated and while they were not the intended victims, this clearly demonstrates that these terrorists do not care about the safety of those living in this community. “They don’t give a second thought to who they harm or the disruption they cause to local people and businesses.” He added: “The threat from terrorism remains severe and whilst the focus for dissident republicans is to kill members of the PSNI and Prison Service, any attack directed at officers has the potential to kill and maim members of the public. “The vast majority of people want Derry City and Strabane to be prosperous and do not support these dangerous individuals. Those who carry out these acts do not care about their community - they only care about their own selfish agenda and are prepared to use any means necessary to achieve their aims. “While there have been a number of incidents which have demonstrated the recklessness of these terrorists; including the bomb which exploded on Bishop Street on January 19 and the security alerts a few days later which showed a disregard for all the people of this city, the number of shooting and bombing incidents across Northern Ireland have reduced significantly in the 12 month period from February 2018 – January 2019 when compared to the previous 12 months.” Police appeal Renewing their appeal, the PSNI said they would like to hear from anyone who was in the areas of Quarry Street, Lecky Road, Barrack Street, Bishop Street, Nailors Row and Long Tower Court, on  January 19 between 6pm and 9pm who may have seen either the vehicle or the terrorists, including the man who abandoned the car and ran away from the scene. Detective Chief Inspector Griffin said: “Did you see a Grey coloured Ford Fusion, WCZ 2167, which was hijacked in Quarry Street and driven to Bishop Street via Barrack Street?  Did you witness anything unusual or see any other vehicles in the area at that time? Do you have any dashcam footage? “Were there any people in the area that you feel may be important to this enquiry? Is there anything else you can tell Police that would help our investigation? “I would also appeal to anyone who has any information about this incident to get in touch with police on the non-emergency number 101, quoting reference number 1204 19/1/19.” Alternatively, information can also be provided to the independent charity Crimestoppers which is 100% anonymous and gives people the power to speak up and stop crime.
ADVERTISEMENT - CONTINUE READING BELOW