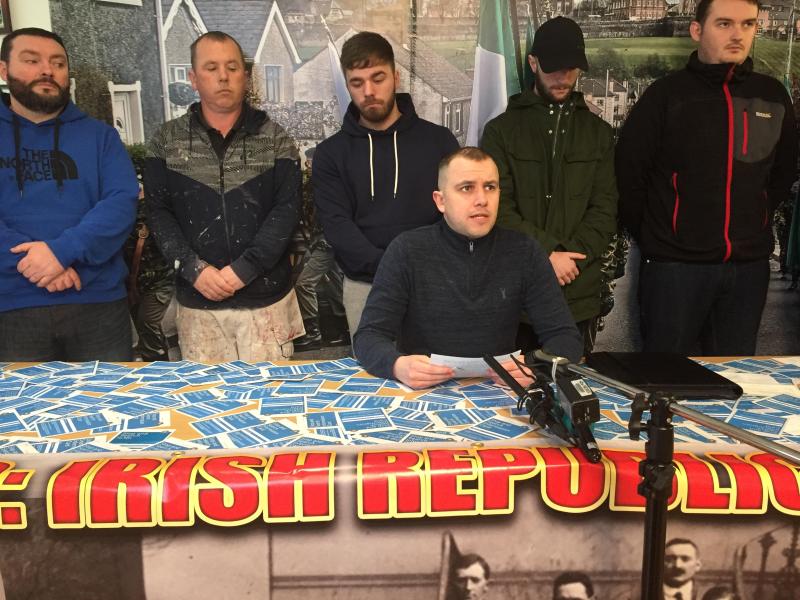 Republican party Saoradh have hit out at the PSNI over what they have described as the heavy handed nature of raids on the homes of their activists as well as repeated approaches by British intelligence to recruit members as informers.

The Derry branch of Saoradh held a press conference at the organisation’s base in the city’s Chamberlain Street yesterday afternoon.

Chair of the local party, Joe Barr read out a statement at the event from behind a desk littered with PSNI stop and search tickets. Also present were around a dozen Saoradh members who have been recently arrested.

Mr Barr also displayed one of the cards which he said had been handed to a Saoradh member during one of the operations.

“After the search our activist was handed his card on which was written the name of a bank, located next door to his work, an account number a sort code and a sum of money. The activist has since been visited in his work and asked how he was doing for money.

“Thankfully, the people of Derry have an example of what happens to those who agree to work for MI5. His name was Raymond Gilmour and he was literally left to rot in a flat in England alone when he was no longer useful,” Mr Barr said.

The Soaradh representative also said that harassment of party members by the police is also due to the “acquiescence of hypocrites who have long claimed to be upholders of civil rights.”

“We are well accustomed to the hypocrisy of political parties in this regard, unveiled now in the face of this onslaught. They have had nothing to say- in fact they have encouraged this. Also notable in their absence from any condemnation of the British states tactics are the usual suspects. Where are the trade unions, religious figures and the bootlickers within the GAA. Will there be a full page spread in the All Ireland final programme about what we are enduring to match the extensive coverage they gave to futile PSNI recruitment advertisements?

Asked if Saoradh are linked to or support the ‘New IRA’ Mr Barr declined to answer saying “you know where that leads. We are a stand-alone party.”

The party representative also said there are no plans to stand Saoradh candidates in the forthcoming local elections. He stated that there were in fact no plans to get involved in electoral politics at all, because it can lead to the “abyss.”

Mr Barr also said: “There are no shortage of these naïve fools who are wrapped up in their own propaganda  that Soaradh is just like the Provisional movement and there will somehow be a point at which we will be forced in to the role of quislings.

“They are wrapped up in the notion that Soaradh represents a mere remnant of the past which can be defeated. They are wrong. This party is going nowhere. This party is working day and daily to develop its revolutionary position and activism. We will be like nothing that has gone before us.”