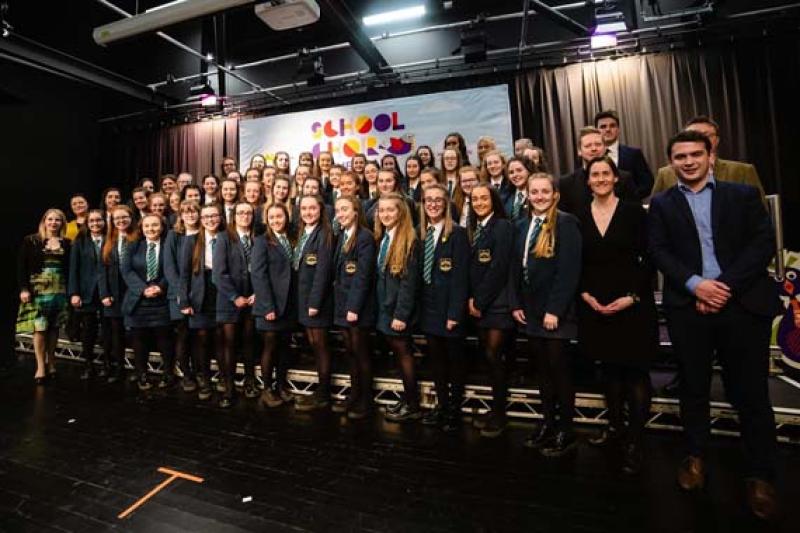 Thornhill College in Derry has won a place in the semi-finals of the BBC Northern Ireland School Choir Of The Year, which will take place at Regent House Grammar School, Newtownards. Over the course of nine weeks, 63 choirs from across Northern Ireland will be singing to impress as they battle it out for a place in the final of the BBC Northern Ireland School Choir Of The Year. Presented by John Toal and Kerry McLean, the series is recorded at eight venues across Northern Ireland, with the second programme broadcast earlier today (Sunday 17 February) on BBC Radio Ulster. The series will culminate in a live final from the Ulster Hall, Belfast, on Sunday 7 April, and which will also be recorded for the first time for BBC NI television. Competing for a place in the final in the first round recorded at St Patrick’s Academy, Dungannon, with presenter Kerry McLean, were: Macosquin Primary School, Limavady; St Mary’s Primary, Melmount, Strabane; Christian Brothers Primary, Armagh; Irish Society Primary, Coleraine; Holy Cross Girl’s Primary, Belfast and Woodlawn Primary, Carrickfergus. In the Senior category, the schools competing for a place in the grand final were: St Dominic’s Grammar School, Belfast; Thornhill College, Londonderry; Belfast Model School for Girls; St Louise’s Comprehensive, Belfast and Coleraine Grammar. It was Macosquin Primary School (junior category) and Thornhill College, pictured, (senior category) who impressed the judging panel, made up of Richard Yarr, Senior Producer Classical Music, BBC Radio Ulster; Ciaran Scullion, Head of Music, Arts Council for Northern Ireland and Rebekah Coffey, soprano and vocal coach. The winning choirs will feature across a range of programming and events during this year. If you missed the programme, catch it again via the BBC Sounds app. And for additional content check out Twitter #SCOTY and pictures go to: bbc.co.uk/scoty
ADVERTISEMENT - CONTINUE READING BELOW