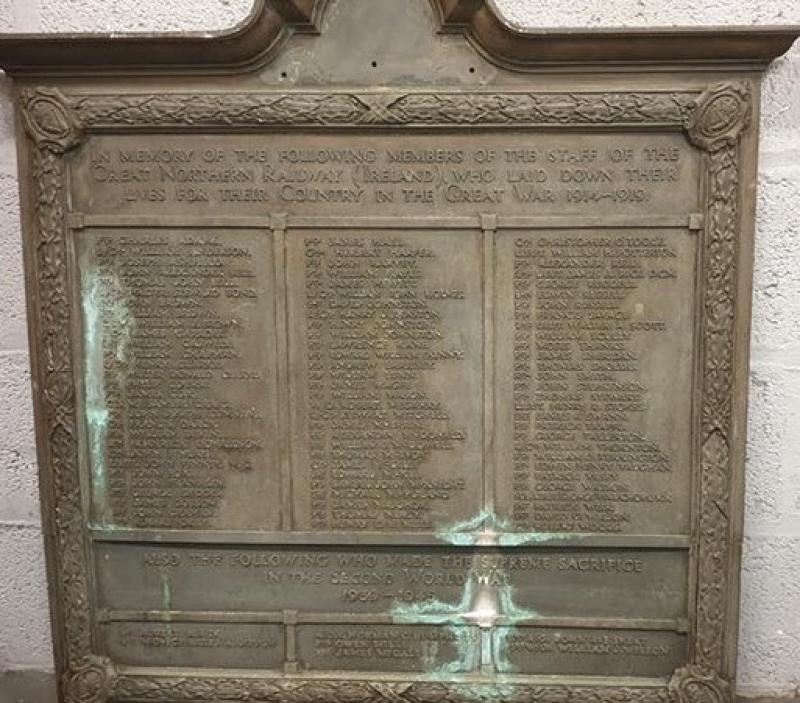 A historical society has expressed hopes that a First World War memorial, believed to have been long lost, can be placed in Derry’s new train station after construction at the site is completed. History Hub Ulster has been instrumental in locating the monument which commemorates workers from the former Great Northern Railway (GNR) line that once had a station at Foyle Street in the city. Originally, there were three of the large wall mounted memorials for the workers who lost their lives in the Great War of 1914-1918 on which almost 100 names are recorded. One of the monuments was at Connolly Station in Dublin and the second was located at Belfast’s Central Station at Lanyon Place. The third memorial was located at the GNR station in Derry which closed in 1965 and was demolished in 1970. GNR services out of Derry ran to destinations including Dundalk and Portadown. It is thought that  the memorial was removed from the GNR base in Derry after a bomb attack in the early stages of the Troubles. Thought to have been damaged in the attack, it’s believed the memorial was then taken to a Northern Ireland Railway storeroom somewhere in the North and has remained there until its recent discovery. Gavin Bamford, the chair of History Hub Ulster told the Derry News: “We started a search for it and we can now say that it’s being repaired. The final location for it will of course depend on Translink, but we would hope that it is placed in the Waterside Station after it is completed. A £27 million project is currently underway at a former railway station in Derry’s Waterside which was originally the station for the Belfast and Northern Counties Railway company. The long awaited and at times controversial plan to turn the station into a transport hub was finally given planning approval last April. When completed the station will boast a new train terminus, bus stands, park-and-ride facility, passenger waiting area and retail units. Gavin Bamford from History Hub Ulster continued: “We are glad at least that the monument didn’t get melted down and we’d very much like to see it up in Derry again.”
ADVERTISEMENT - CONTINUE READING BELOW