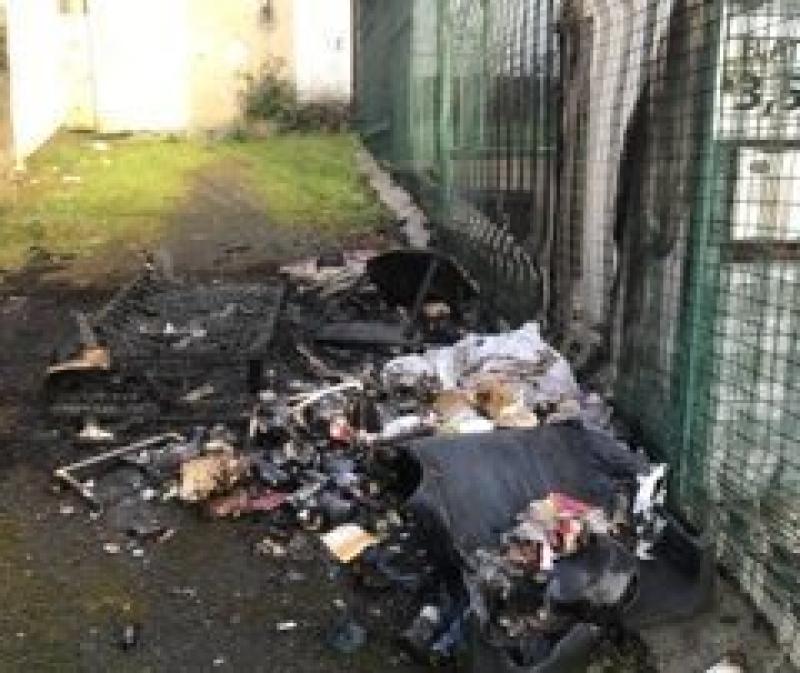 Residents of Maureen Avenue and Belleview Avenue in the city have said that a prolonged spate of illegal dumping and wider anti-social behaviour is destroying their normally quiet neighbourhood.

A fire in a lane that runs between both streets last weekend was the latest episode in a series of recent incidents in the area.

Northern Ireland Fire and Rescue Service (NIFRS) has confirmed that the fire which took place in the early hours of last Sunday, February 24, was started deliberately.

A spokesperson for NIFRS said that firefighters from Northland Road station extinguished a fire made from a quantity of rubbish and a sofa that had been pushed against a fence just after 2am on Sunday morning.

One resident of the area who does not wish to be named told the Derry News: "Basically, the lane is being used as dumping ground for sanitary waste, condoms and now we've had a fire started there too.

"Some of the neighbors I have spoken to have been there for fifty years and they are appalled at how down hill the area has become.

"There are groups of people drinking in the area and engaging in other behaviour that I don't even want to describe. I heard the commotion on Sunday morning and went out, but the neighbours called to me to go back in because they'd already called the fire brigade."

The resident added that the affected area is also strewn with other items of household waste, empty alcohol containers and used nappies.

The general effect has been that the laneway is virtually inaccessible to residents who are now placing their bins on the footpaths outside their homes and as result walkways have also become restricted.

The resident continued: "One older neighbor has told me they are intimidated by the behaviour and they feel afraid in their own home. It's hard to tell whether those involved in this are from the local area. They could be from anywhere, but they are over 18. You can hear them shouting and fighting because they are drunk and a lot of these incidents take place after the pubs close.

"There's also an issue with street lights in the area that aren't working and I think that's why they gather there because they can't be seen."

Independent Nationalist candidate for the Moor Emmet Doyle criticised the anti-social elements responsible for starting fire to material in the laneway last weekend.

Mr Doyle said: "I was contacted by concerned residents in the Belleview Avenue and Ferguson's Lane area after a fire crew attended a fire at the back of homes at Belleview Avenue in recent days.  A number of items were dumped at the laneway and set alight.

“The aftermath of the fire has left the laneway in a terrible state and left residents worried for their safety, especially elderly residents.

“I have been in contact with Council about this and I am calling on statutory agencies to assess the laneway for gates and will be working with residents over the next few weeks to ensure we get this matter resolved.

"This anti-social element must recognise that their actions could well had led to a house in the community catching fire and it is totally unacceptable."