Derry victim amongst those scammed of £90,000 in one week across the North 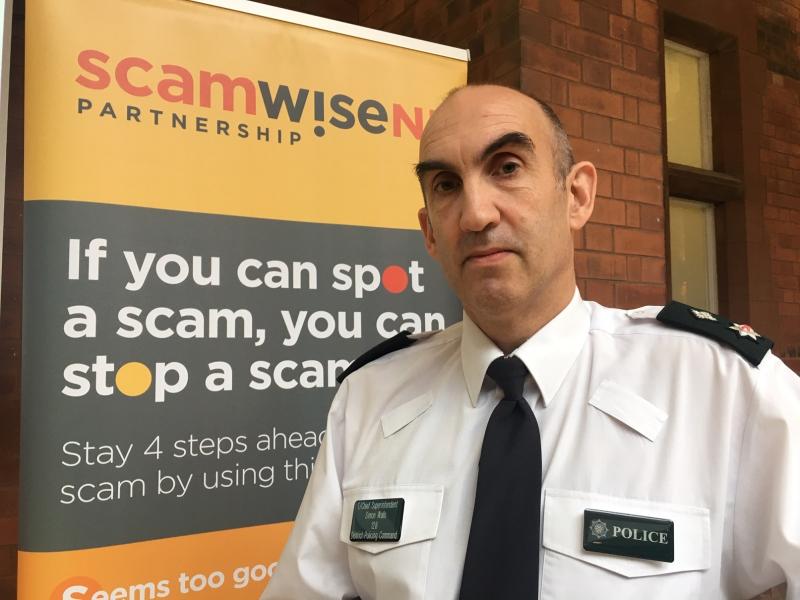 A Derry man in is 70s was amongst people from across the North who were scammed out of a total of £90,000 in a single week police have said. The PSNI are asking the public to be on their guard following recent reports of scams in which people in counties Derry, Antrim and Fermanagh were conned out of major amounts of money. Chief Superintendent Simon Walls issued the warning after three reports of telephone and online scams in the last week. He said: “Unfortunately, we continue to see members of the public lose very significant amounts of money in online and telephone scams. “In one of the most recent reports made on Monday, February 18 we heard from a man in his 80s from Fermanagh who had been swindled out of £20,000 in a telephone scam a few days previous. During the morning of Friday, February 15 , the victim reported spending around five hours on the phone with a man who claimed to be from the ‘Fraud Squad’ department of a bank. “The fraudster was able to get some personal details from the man, including his name and date of birth, which in turn gave him remote access to the victim’s computer and his money. The victim later noticed that £20,000 had been taken from his account. “Later that afternoon, we received a report that a man in his 40s from County Antrim was conned out of almost £65,000. The money was lost after the victim’s wife was contacted by a woman claiming to represent her telecoms provider about broadband speed issues, in a phone call that lasted around three hours. She was then passed on to another fraudster claiming to be from the same company, who persuaded her to give them access to her computer. She was convinced to perform a series of actions on the computer, including logging on to both her and her husband’s online banking. This gave the scammers access to both accounts and resulted in the loss of close to £65,000 from the husband’s bank account. “That evening, we received a further report from a man from Derry in his 70s who was swindled out of close to £4,000 over a period of almost five years. The victim was initially contacted in 2014 by someone claiming to be from a London-based law firm, and told that if he sent money to a woman in London, via electronic money transfer, he would receive a lump sum of £20,000 after a period of time. The man sent a number of payments over the five-year period, up until he made the report to us. “These are absolutely despicable crimes, carried out by callous faceless criminals who don’t care about their victims; all they care about is taking their victims’ money. Fraudsters never think about the devastating impact their scams have on their victims, but unfortunately it shows they will stop at nothing to get what they want. “These reports illustrate how scammers are quick to take advantage of people’s vulnerability and good faith. Unfortunately, there is no end to the methods fraudsters will use to dupe people into giving them money. "Scammers who target people, don’t prey on a specific gender, sexuality, race or age. They target everyone; just don’t let it be you. Don’t let yourself become a statistic. "I want to take this opportunity to appeal to members of the public to always err on the side of caution with any text, call, email or letter asking for payment or personal details in order to release money, refund fees, pay lottery wins or supply a holiday, giveaway or service. Tricksters know all the scams and will often communicate with victims in a convincing manner. “Our advice is that if you are at all suspicious about a call you receive, hang up and phone the organisation the person is purporting to represent to check their authenticity. Ideally, make the call from another telephone so you can be sure the original caller has not remained on the line. Never be pressured into a transaction over the phone. “Guarding your personal and banking details is essential. Never ever disclose them to any unauthorised person or allow anyone access to them via your computer. “If you have received a call of this kind or if you’re concerned by the intent of unsolicited calls, emails or letters then please report it to Action Fraud via their website www.actionfraud.police.uk or by phoning 0300 123 2040, or call police on the non-emergency number 101. “Further advice and information can also be obtained by visiting www.nidirect.gov.uk/scamwiseni or the ScamwiseNI Facebook page @scamwiseni “And remember if you can spot a scam, you can stop a scam.” CAPTION: PSNI Chief Superintendent Simon Walls
ADVERTISEMENT - CONTINUE READING BELOW