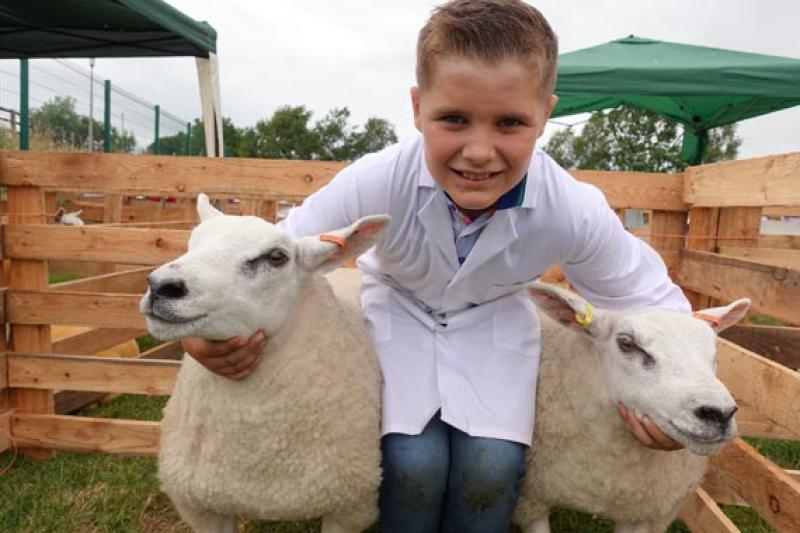 When Cahir McGilligan was writing his Christmas list in 2017, there was only one thing he really wanted from Santa that year – to feature on one of the North’s most popular television shows. The Dungiven boy was so eager to appear on UTV farm show ‘Rare Breed’ that he penned a letter to Santa and asked for his help. So when UTV producers contacted Cahir’s mum Nicole in April 2018 to say they were interested in featuring the family on the show, the north Derry schoolboy was delighted. “I’ve always watched the show so I asked Santa in 2017 if I could go on it. When they got in touch I was really excited,” said ten year-old Cahir, who has featured on the last three episodes of the programme alongside his dad Sean and grandad Harry. Cahir (pictured), who is probably one of the youngest to ever feature on the show, has been popular with viewers who have tuned into the new series, which began in January. Over the last few weeks, viewers have seen three generations of the McGilligan family busy at work on their farm outside Dungiven. In recent episodes they have been filmed lambing ewes, visiting the Balmoral Show and shearing a 600 strong flock of sheep during last summer’s hot spell of weather. Cahir, who attends St John’s Primary School in Dernaflaw, said although he was ‘nervous’ about filming he was ‘really happy’ to be part of the show. “I’m excited to get home from school to watch the show on Thursday nights,” said Cahir, who has been farming every weekend with his dad and grandad since he was just four. “I want to be a farmer when I’m older. My favourite part about farming is looking after the animals and helping daddy and granda.” Last week’s episode of ‘Rare Breed - A Farming Year’ was once again the most watched programme in the North with over 134,000 viewers tuning in. Tonight's episode (being screened on UTV at 8.30pm) will see Cahir, who is an avid footballer and hurler with Dungiven clubs, St Canice’s and Kevin Lynch’s, and who also plays soccer with Dungiven Celtic, showing lambs for the first time in Omagh. Viewers will his hard work pay off both in the lamb class, and the young handlers class. Cahir’s dad Sean said: “The whole family is very proud of Cahir. It’s a great achievement for him.”
ADVERTISEMENT - CONTINUE READING BELOW