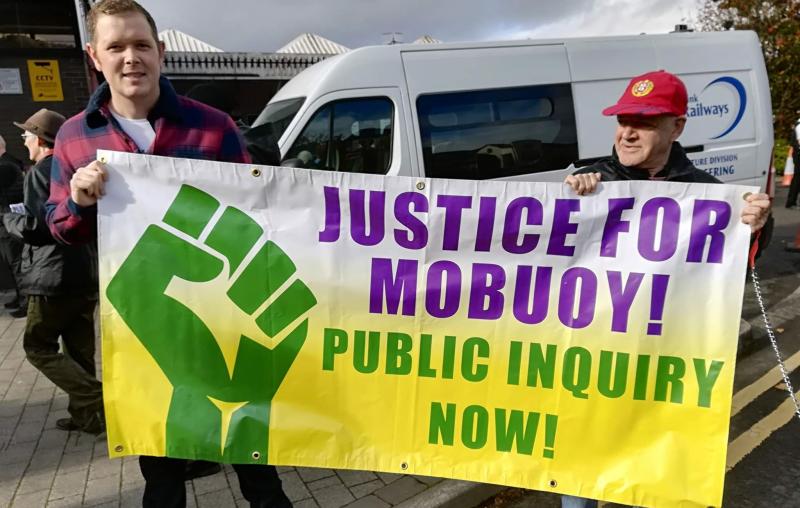 A government department has said that remediation works at the Mobuoy Road “toxic super dump” in Derry will not commence unless funding is secured. The comments made by the Department of Agriculture, Environment and Rural Affairs (DAERA) come ahead of a scheduled community meeting at Drumahoe Primary School on March 6 at which people have been encouraged to demand answers and a clean-up of the site after years of inaction. The Mobuoy Road waste site consists of two distinct parcels of land, namely the City Industrial Waste (CIW) Site and the Campsie Sands and Gravels (CSG) site – situated 1.5km east of Derry and occupying a significant 46 hectares of land – the equivalent of 46 rugby pitches. It has been acknowledged by environmental experts that the illegal dump poses serious risks to the River Faughan, which runs alongside it, and supplies 60% of the city’s drinking water. Eamonn McCann has been vocal about the urgent need for a clean-up operation over the years and raised Mobuoy in his first speech at Stormont as an MLA.  He also said that people were aware of illegal activities at the site. Yesterday, Mark H. Durkan MLA described it as a “ticking time bomb” which could turn a “huge environmental crime” into an “even bigger environmental crisis”. Previous waste management activities on the CIW site include an old landfill regulated by the legacy Derry City Council. At the stakeholder meeting on November 25, 2015, the estimated volume of controlled waste illegally disposed at the Mobuoy waste site was reported to be a minimum of 913,105 m3. The nature of the illegal deposits includes municipal waste, construction and demolition (C&D) waste and municipal waste mixed with C&D waste. Both the CIW site and CSG site have been subject to illegal waste disposal activities, according to local council officials. Paul Hughes has been a member of the Mobuoy Road Stakeholders Forum which has been meeting at regular intervals over the past number of years. The forum is made up of local youth and community representatives, elected representatives as well as members of the River Faughan Anglers. ‘Justice for Mobuoy’ At recent meetings remediation options have been explored and outlined by the Northern Ireland Environmental Agency in terms of cleaning up this illegal toxic “super dump” - which is understood to be one of the biggest illegal landfills in all of Europe. Mr Hughes said: “We are continuously told that that the Department is working towards cleaning up the dump. It's time to make it happen. At a recent meeting if the Council's Environment & Regeneration Committee the officer charged with heading up the clean-up said that they have been 'lucky' with Mobuoy so far. What a statement to make. “Mobuoy Dump must be cleaned up without further delay. The floods of August 2017 proved just how fragile the situation is.  The River Faughan remains under constant threat from pollution. “We should all be concerned about the issue.  We must all stand up for the Faughan.  I would encourage everyone to get along to this meeting and ask questions. I would suggest that everyone writes down all their questions and puts them directly to the NIEA on Wednesday 6th of March.” He added: “Our elected representatives have failed Mobuoy and have failed the River Faughan.  Despite a public inquiry having been unanimously agreed back in 2015, it never ever happened. “It's time for concerned citizens to take control of this process and now is the time to demand that Mobuoy Dump be cleaned up once and for all and lessons learnt do that a disaster like this is never allowed to happen again. “It’s time to stand up for the River Faughan.  Make a point to attending this meeting, demand answers, demand a full clean up, demand a public inquiry. It's time to get Justice for Mobuoy!” ‘Subject to funding’ When asked what would need to be done to make the area safe and prevent any risk of contaminating the DAERA said would be dependent on funding. A spokesperson explained: “The Northern Environment Agency has agreed an integrated approach for remediating the Mobuoy illegal waste sites that takes full account of the need to protect the River Faughan. “At this stage DAERA through the Northern Ireland Environment Agency, is seeking to enforce the former operators to remediate. In parallel to this, DAERA is developing a significant business case to support remediation of the site. “The solution is not a simple one. The protection of the River Faughan needs to be managed through a remediation programme that comprises of several complementary phases in which there are a number of treatments on site within each phase of works. All elements of this programme will need to be supported by an extensive environmental monitoring programme. “At this stage, the remediation programme is subject to DAERA securing funding for the preparatory works required prior to remediation commencing on site.” Further detail will be presented by NIEA to the local community at an event on Wednesday 6th March at 7.30pm in Drumahoe Primary School. Photo: Environmental Campaigners Paul Hughes & Eamonn O'Donnell at the Environmental Gathering rally in Derry last October.
ADVERTISEMENT - CONTINUE READING BELOW