Bloody Sunday decision: 'My question is why would heroes be hiding their actions in the past?'-Kate Nash 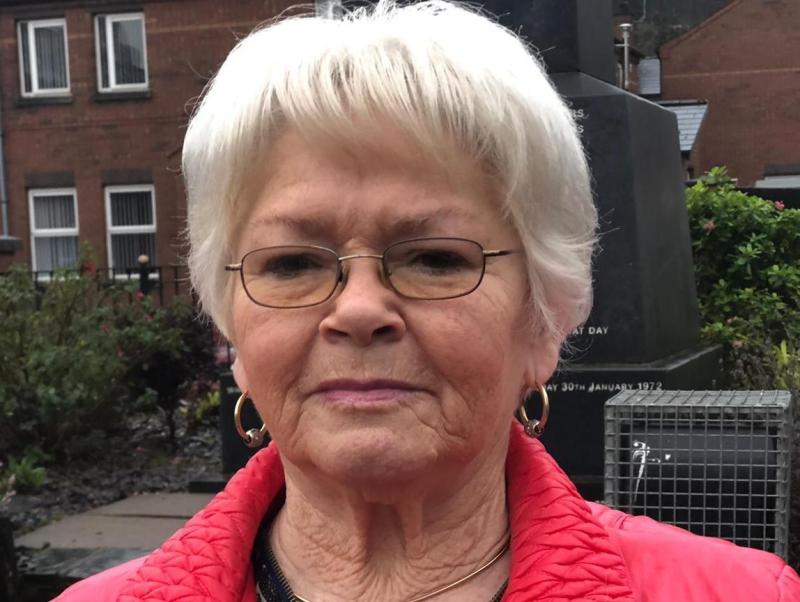 Kate Nash’s brother William was shot dead on January 30, 1972 and her father Alex was seriously wounded attempting to come to his son’s aid.

Speaking a week before the Public Prosecution Service (PPS) announces its decision on whether or not to prosecute soldiers in relation to Bloody Sunday she told the Derry News: “There’s absolutely no reason why these people should not be prosecuted. I mean, there have been various people that we’ve heard like Boris Johnson that these soldiers should not be prosecuted because of their age.

“They are asking ‘is this how we treat our national heroes?’ Well, I can tell you should treat national heroes very well, but these guys are not heroes. They committed the atrocity on Bloody Sunday.

“My only complaint about the whole thing is how long it took. It should never have taken all this time. We are talking about almost half-a-century. It seems to have gone in the blink of an eye.

"Also, they should be joined in the dock by the officers who were they. People talk about the soldiers having been ordered in as some sort of excuse not to prosecute them, but as ordinary soldiers they are still responsible for their actions. However, the fact of the matter is that their officers left these soldiers by themselves. They were described as 'bad apples'. But, of course we know that that's the establishment looking after itself. Is that fair?

"I think the PPS should be questioned on theft that squaddies are being charged but their officers are not with them.

"But, that's not the conclusions that Saville came to. He concluded that the atrocity was carried out by nine 'bad apples'. Well, I don't agree with that because they've spent a long, long time in their cover up.

"We've had the Widgery whitewash and then Saville and the whole truth still didn't come out there either. Look at the Ballymurphy case, and thankfully after all these years they have an inquest. But during Saville our legal teams did refer to Ballymurphy which happened only a few months before Bloody Sunday, but Lord Saville wouldn't touch that.

"What he did touch on however was looking into the background relatives of some of the witnesses and whether or not they were republicans. So, why show interest in that? To me that seemed like an information gathering operation instead of concentrating on the Ballymurphy case which had more relevance."

By the end of its 12 year run the Saville Inquiry notched up a legal bill of almost £200 million. It is fact that received much criticism from both Westminster MPs and unionist politicians here.

Kate said: "We've been criticised over the years about the cost of the inquiry. But, we said from the start that the truth cost nothing and that the £200 million should have been put into the health service and schools and that it was ridiculous.

"Did we get the truth for the price of £200 million? Well, I came to the conclusion myself that the money was spent on another cover up. We most certainly appreciated the Prime Minister of England's saying that our loved ones who died were innocent. But, the £200 million I feel was to show that the outcome would be that the establishment was innocent.

"There are innocent people who are murdered every week but people are taken to court for it. That's what the law is about. It's supposed to be for everybody. Justice is the foundation of any society.

"I know it goes wrong and people end up in prison for crimes that they haven't committed and it happens fairly often which of course isn't right. But, we were never on a level playing field because every string that could be pulled for these soldiers was pulled."

Kate Nash also said that even with regard to the arrests of soldiers during the PSNI investigation the system was skewed in favour of the ex-military personnel.

In 2015, the soldier referred to be the cipher Lance Corporal J was arrested. It is believed he was the man responsible for wounding Kate's father Alex.

Kate continued: "I am told that when Soldier J was arrested he was terribly shocked. What we learned from that was that his family were made aware that he was involved in Bloody Sunday and he was ashamed. So, if you like, he didn't want that known to his family.

"My question is then, why would heroes be hiding their actions in the past?

"That perception has always been out there that all Catholics were republicans when they are not. We know that there were deals done with the IRA and the British Government over the 'On The Run Letters' (OTR).

"It has nothing to do with it. Perhaps that was done to ensure that soldiers wouldn't be prosecuted because they have tried every dirty move in the book.

"This has created stories about hounding soldiers-we haven't hounded soldiers. We have been accused of seeking vengeance for years. Never-we simply want the same thing for my brother that everybody else would expect in law.

"We want whoever killed him to be made responsible. But, there are officers thereto. There are more questions there and plenty more to be answered.

"They got medals. They were lauded for what they did on Bloody Sunday. An officer received an OBE. We don't even know if he's one of the soldiers that may be prosecuted."

The former British Army officer Kate Nash referred to is Lieutenant Colonel Derek Wilford who received his award in the New Year's honours list in January, 1973 almost exactly a year after Bloody Sunday.

She said: "I applied a few years ago to the Forfeiture Committee in England to have those medals returned. What kind of an insult is that to innocent victims who were murdered that someone got a medal for killing them? What was brave about that? What was heroic about that?"