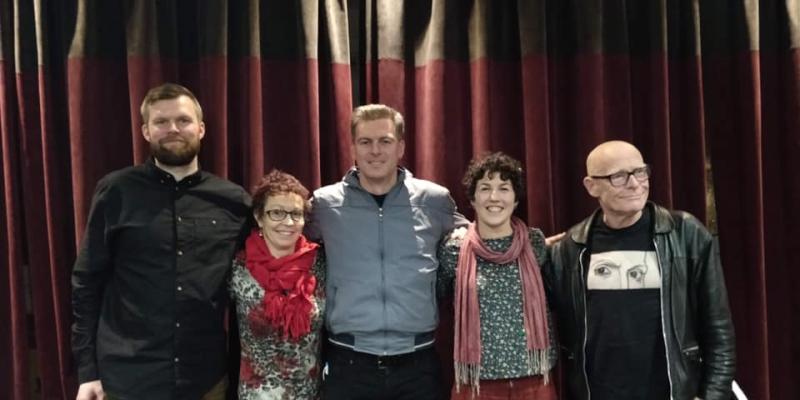 A People Before Profit representative yesterday warned that there will be mass civil disobedience in Derry and throughout Northern Ireland if a hard border is introduced through a no-deal Brexit. Gerry Carroll MLA gave evidence to the NI Affairs Committee inquiry at Westminster examining the implications of the EU Withdrawal Agreement and the backstop for Northern Ireland. He cautioned that a hard border would have “dangerous consequences” and believes that people will take to the streets in their droves to oppose any such move. Mr Carroll did however make clear that he and his party have a vision of a “socialist Ireland” which is neither “beholden to the British empire or the burgeoning and growing EU empire” and said he would therefore like Ireland to be positioned outside of the EU. When questioned by MP Lady Sylvia Hermon about what exactly he meant in relation to the border, Mr Carroll explained: “We’ve seen reports in the media that a hard border could potentially lead to violence which is something I, and People Before Profit, would be totally opposed to. “It’s very, very dangerous and tantamount to playing with fire if people think that they can erect more checkpoints and more security on the border. It’s not my words, but the words of others, and I think it could have very grave consequences on people’s lives. “Not just in that dangerous context but people will also be restricted in their ability to move across the border, if they’re from Donegal and want to study in Derry, or if they’re in Derry and want to go to Donegal, people’s lives could be but shouldn’t be restricted by any reinforcement of a border.” He agreed with the statement of a PSNI chief constable George Hamilton when he said that fortification of the border would be seen as “fair game” for “violent dissident republicans” and the New IRA. Lady Hermon pressed Mr Carroll further about comments he made earlier in the session, which she said, “sounded a little bit like a threat”. “I just want to see what you meant by it,” she inquired. “When you said that ‘Brexit and a hard border could result in mass action on the streets?’ Do you want to read that bit back again? I’m quoting you directly.” ‘Civil disobedience’ In response the PBP MLA clarified: “It’s not just my view, the head of Corporation Ireland said there will be civil disobedience if there’s no deal and potentially a hard border.  So I’ve no doubt about it, whether I say it or not, if there are restrictions on the freedom of movement of people either north south or south to north, there’s going to be civil disobedience on the streets, there is going to be a protest. “And just to clarify, from our perspective we want that to be peaceful, we want people to come out in people power festival-type atmosphere, where people are taking to the streets and saying ‘we will not accept this’, but not violent in any way or form. “I imagine this will take place across the island, I can’t obviously predict, but speaking to people north and south, people in Derry, people in Dublin, people across the country, not just on the border area but right across the island.” Conversation moved on to the topic of a united Ireland and Mr Carroll said that prospect was gaining cross-community support due to “uncertainty and fear” brought about by Brexit. Photo: Gerry Carroll (far left) pictured recently with party members who will be standing for election to Derry City and Strabane District Council in May.
ADVERTISEMENT - CONTINUE READING BELOW