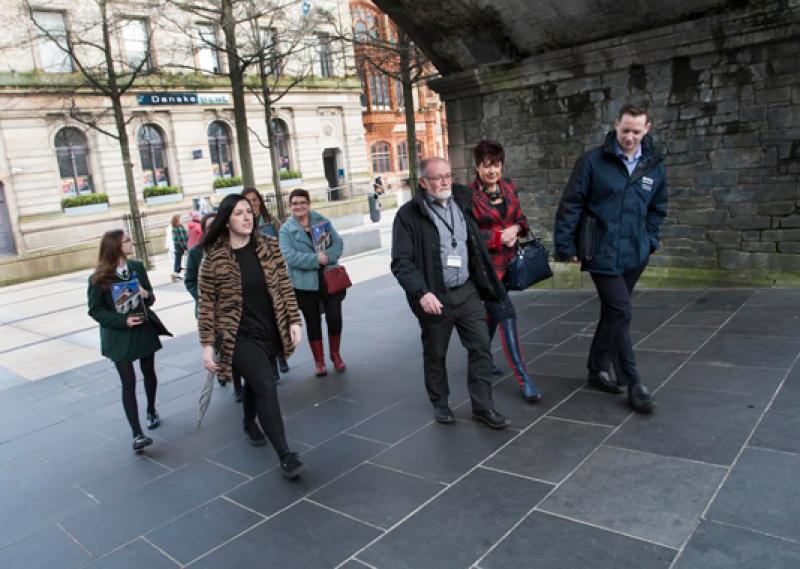 A celebratory event to mark the successful completion of Phase II of the Walled City Townscape Heritage Initiative delivered by the Walled City Partnership has taken place in the Guildhall The event included the launch of a new book and the unveiling of acknowledgement plaques which are to be mounted on key competed properties around the THI area. A walking tour of the projects that benefited from the scheme followed the event. Mayor of Derry City and Strabane District Council Cllr John Boyle speaking following the event said it was important to acknowledge the work carried out by the Walled City Partnership in successfully delivering this phase of the Townscape Heritage Initiative. He said: “I am delighted that this event took place and that stakeholders and the wider public were given an opportunity to see at first-hand how beneficial this project has been in term of celebrating our heritage and allowing the regeneration of historic heritage sites across our Council area.” The event was held at Derry’s Guildhall with guest speaker Joe Mahon, and saw the unveiling of the new publication entitled: “New Life for Old Streets” which will celebrate the success of the Walled City Townscape Heritage from 2002 to 2018. Ronan O’Donnell is the Council’s Regeneration Project Officer and Project Manager with The Walled City Partnership. He said the event was a great way of showcasing the work that has been achieved and highlighting the funding from the National Lottery Heritage Fund and commitment of the Walled City Partnership its partners the Foyle Civic Trust, Council and the City Centre Initiative along with stakeholders to protecting and enhancing its historic heritage. He explained that a total of 33 properties benefitted from grant assistance from the THI scheme in terms of heritage-led regeneration to the external fabric of buildings and internal conversion/renovation works. “The total combined capital value of this regeneration project in the City Centre amounted to around £10.5m which is made up of The National Lottery Heritage Fund’s Townscape Heritage Initiative grant and other public and private funds. “This project has been hugely beneficial in working to repair, restore and regenerate the properties in and around our historic city centre and preserve it for future generations,” he added. The celebratory event comes just weeks after the Walled City Partnership, and its members the Foyle Civic Trust were formally recognised in being awarded the overall UK national winner of the 2018 Heritage Angels award – supported by the Sir Andrew Lloyd Webber Foundation. Mayor Boyle concluded: “As a Council we are hugely proud of what we have achieved through this initiative and are delighted to formally acknowledge by hosting this celebratory event. We are delighted it was such a huge success and were delighted to see so many people coming along to acknowledge the excellent work we are doing to showcase the best of our local built heritage.” National Lottery Heritage Fund’s Committee Member Sheila McClelland added “The National Lottery Heritage Fund has invested nearly £24m in historic towns across Northern Ireland and we’ve seen the transformational effect of this funding, restoring and reusing vacant and derelict heritage buildings, creating jobs, boasting local economics and creating a strong sense of place. The Walled City Partnership has used National Lottery player’s investment to great effect and the transformation they have led is striking. They have helped people to feel proud of their heritage, roots and hometown. We’ve been delighted to work with the Partnership and to be part of this wonderful initiative. We congratulate everyone involved”
ADVERTISEMENT - CONTINUE READING BELOW